Market participants breathlessly awaited the latest Fed Decision. A white-hot CPI report last Friday had markets abuzz. Would Powell & Company move ahead with the predicted 50 basis point rate hike or would it ramp up its effort to stamp down inflation with a sharper increase?

The Fed floated a trial balloon on Monday when the Wall Street Journal, a well-known launching pad for Fed ideas, posted a story about a 75-bps move.

The market was slipping lower before the 75-basis point suggestion was floated. The S&P would hold the 3750 level and arrest its decline in reaction to the rumor. Surely the market should have declined if the Fed was going to tighten more aggressively?

And that is the interesting aspect of this Fed meeting. It was not necessarily about the 50- or 75- or 100-bps hike but rather if the central bank could re-establish trust with the market after badly misreading inflation patterns over the past 18 months.

Did they achieve that goal on a hot Wednesday afternoon in the middle of June?

The Fed did indeed push forward with a 75-basis point hike, the biggest one-time hike since Bill Clinton was in office.

The directive saw some minor changes. One head-scratcher was the uptick in economic language as the Fed said, “Overall economic activity appears to have picked up after edging down in the first quarter”. Recent data may not reflect that optimism, especially when one looks at Citigroup’s Economic Surprise Index.

It is likely the FOMC wanted to instill the idea that the economy is strong enough to digest a steeper than expected rate hike cycle. The problem is that it opens questions as to whether they are aware of the problems consumers are facing? Or are they just holding out hope for a “soft landing”?

The FOMC did ramp up rhetoric around inflation stating it was “strongly committed to returning inflation to its 2% objective”. This compared to the May statement that it was “highly attentive”. The Fed wanted markets to know that they took the threat seriously.

The rest of the statement was your standard nomenclature. The one surprise was Kansas City Fed President Esther George dissenting in favor of a 50-bps hike. George has been known as one of the most hawkish Fed presidents over the past decade. Her dissent was based on the idea that she did not want to confuse the markets from the Fed’s prior message of a 50-bps hike.

Turning to the Summary of Economic Projections, we can see pivots by the committee. The Fed started this SEP process in 2011 as we rose from the Great Financial Crisis and the central bank started a tightening process following three long years of expansionary monetary policy. I think you would be hard-pressed to find a more volatile meeting-to-meeting change in forecasts. 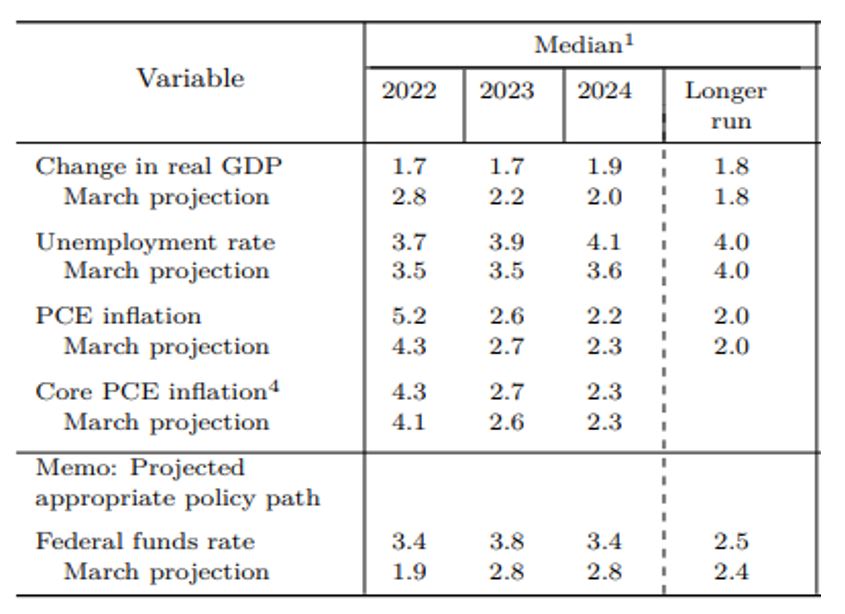 The Fed cut its GDP outlook for the next three years. It raised its Unemployment projections through 2024. This suggests that it is willing to take the pain on one side of its objectives (full employment) to achieve success in its other directive (price stability).

Both core and headline PCE projections for 2022 increased but it did lower its headline numbers for 2023 and 2024.

The Fed Funds Rate is what the market is most interested in and that saw a big jump as the central bank looks to tighten at a faster clip. The June hike bought rates to 1.50-1.75%. The 3.4% projection suggests the 3.25-3.50% area will be where we end the year, meaning seven more rate hikes in the final four meetings of 2022.

Finally, the Fed reiterated its balance sheet runoff plan. This may be a surprise as some expected the central bank to pull forward the monthly cap on how many Treasury Bills or Mortgage-backed securities it would allow to run off.

Again, did this win the market over?

The truth is we do not know. One rule of thumb for trading around Fed Days is that it usually takes about 24 hours for the market to make up its mind. Always be careful of the initial reaction. One only needs to look back six weeks to see the S&P rallied to 4300 before rolling over aggressively and falling 10% over the following week.

The initial reaction to yesterday’s news was positive. A brief dip to the 3730-area led to buyers stepping in and squeezing shorts higher. The S&P hit an afternoon high of 3843, more than 113 points off the initial reaction lows. Indices saw a small roll over into the close.

The leadership in the rally gave us pause. The Ark Innovation (ARKK), Biotech ETF (XBI), Cloud Computing ETF (SKYY), Solar ETF (TAN), and Software ETF (IGV) were among the leaders. This is a group that had all the looks of a potential oversold, dead cat bounce. It did not strike us as new leadership emerging.

Markets would slide further in the overnight session. It is following a similar pattern witnessed around the May announcement. The S&P futures are now down 23% from their November peak and 12% in the month of June alone.

It is unlikely Powell achieved his goal. We will continue to monitor the situation and see if Powell did win back the hearts and minds of the zeitgeist. It is a tall order to accomplish in one afternoon. He will need a few economic data points to back up his message. Markets will have heightened sensitivity to upcoming economic reports, particularly inflation figures, as they cross wires.

The index is coming into support levels in this 3500-3700 area. We will see if bulls want to step in and support these levels. Investors do not need to be heroes so any plans to add to the portfolio should be done in smaller size.

Look for confirmation on support holding and ask yourself this question- will this bear market really end on a 75-basis point hike?