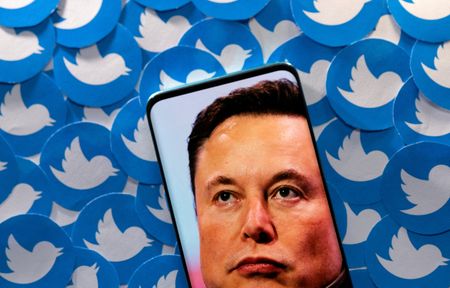 (Reuters) – Elon Musk warned Twitter Inc on Monday that he might walk away from his $44 billion deal to acquire the social media company if it fails to provide the data on spam and fake accounts that he seeks.

This was not the first time Musk had suggested publicly his acquisition of Twitter may not happen. But the warning, delivered in a letter from Musk’s lawyers to Twitter’s chief legal officer, Vijaya Gadde, marked an escalation. It accused Twitter of being in “material breach” of its deal obligations.

Musk’s threats to tear up the deal have coincided with a plunge in many technology stocks – including the electric car maker that he leads, Tesla Inc – amid concerns over an economic slowdown and higher interest rates in the face of raging inflation.

Twitter shares ended down 1.5% at $39.57 on Monday, a large discount to the agreed $52.20 deal price, as investors bet Musk will either convince Twitter to agree to a lower deal price or walk away.

In the letter to Twitter, Musk’s lawyers reiterated his request for details on bot accounts and said he reserved all rights to terminate the acquisition as the company was in a “clear material breach” of its obligations by not providing him with the information.

Twitter responded that it planned to enforce the completion of the deal on the agreed terms. “Twitter has and will continue to cooperatively share information with Musk to consummate the transaction in accordance with the terms of the merger agreement,” the company said in a statement.

A self proclaimed free-speech absolutist, Musk has said one of his priorities will be to remove “spam bots” from the platform.

He tweeted that the Twitter deal was “temporarily on hold” in mid-May, saying he will not move forward with the offer until the company showed proof that spam bots account for less than 5% of its total users. He has said he believes spam bots constitute at least 20% of the user base.

Independent researchers have projected that 9% to 15% of the millions of Twitter profiles may be bots.

In his letter, Musk said he needs the data to conduct his own analysis of Twitter users because he did not believe in the company’s “lax testing methodologies.” Twitter has said it stands by its projections and it cannot provide proprietary information on how it produces them.

“He is trying to walk away from the Twitter deal, this is the first shot across the bow,” Wedbush analyst Dan Ives said.

Legal experts have told Reuters the disclaimers Twitter used in its projections on spam accounts give it some protection against potential lawsuits, be they from Musk over the deal or shareholders over the accuracy of the company’s regulatory statements.

Even if Twitter’s estimate is off, Musk would have to show that the San Francisco-based company was seeking to willfully mislead – a high legal threshold.

“It’s fairly obvious that Musk has buyer’s remorse and he is trying whatever to get a reduction in price, and I think he may succeed,” said Dennis Dick, a proprietary trader at Bright Trading LLC.

To be sure, Musk may be able to walk away or renegotiate the deal even if the law is on Twitter’s side. This is because any litigation is likely to be protracted, and Twitter may decide it makes more sense to agree to a lower price or receive compensation from Musk rather than try to force him to complete the transaction in court.

Several companies renegotiated or walked away from agreed acquisitions when the COVID-19 pandemic broke out in 2020 and delivered a global economic shock.

In one instance, French retailer LVMH threatened to walk away from a deal with Tiffany & Co. The U.S. jewelry retailer agreed to lower the acquisition price by $425 million to $15.8 billion.

As part of the deal, Musk is contractually obligated to pay a $1 billion breakup fee – a sliver of his fortune pegged by Forbes at $219 billion – if he cannot complete the transaction because the debt financing falls apart or regulators block it.

U.S. antitrust regulators last week decided not to further scrutinize Musk’s acquisition of Twitter, making it unlikely that it would stumble on regulatory grounds. The European Union is still reviewing the deal.

In Texas, Attorney General Ken Paxton announced on Monday that he had begun an investigation into Twitter for what he said was “potentially false reporting over its fake bot accounts,” a potential violation of state law.

Paxton asked Twitter to turn over documents as part of the probe.

“If Twitter is misrepresenting how many accounts are fake to drive up their revenue, I have a duty to protect Texans,” Paxton said in a statement.

A Twitter spokesperson said the company stood by its filings with the U.S. Securities and Exchange Commission.

(Reporting by Nivedita Balu in Bengaluru; Additional reporting by Tiyashi Datta in Bengaluru, Krystal Hu and Greg Roumeliotis in New York and Diane Bartz in Washington; Editing by Anil D’Silva and Matthew Lewis)