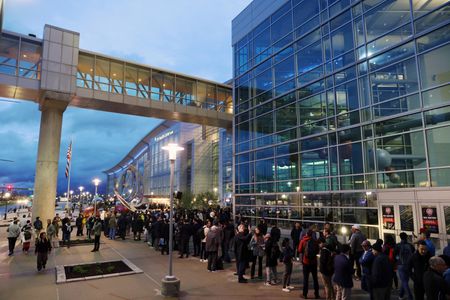 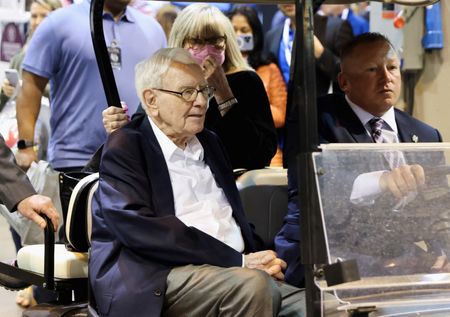 By Jonathan Stempel and Carolina Mandl

OMAHA, Neb. (Reuters) -Warren Buffett on Saturday railed against Wall Street excess, and after spending tens of billions on stocks and companies in March extolled the virtue of keeping lots of cash, as he hosted Berkshire Hathaway Inc’s first in-person annual meeting since 2019.

The meeting came after Berkshire revealed it had scooped up more than $51 billion of stocks in the first quarter, including a much larger stake in Chevron Corp, and has for now stopped repurchasing its own stock.

Berkshire also said operating profit was little changed in the first quarter, as many businesses were able to boost revenue despite supply chain disruptions caused by the Omicron variant of COVID-19 and Russia’s invasion of Ukraine.

Buffett had in his annual shareholder letter in February bemoaned the lack of investment opportunities.

That prompted a shareholder to ask what changed in March, when Berkshire bought 14.6% of Occidental Petroleum Corp and agreed to pay $11.6 billion for insurer Alleghany Corp.

Buffett said it was simple: he became interested in Occidental after reading an analyst report, and in Alleghany after its chief executive wrote to him.

“Markets do crazy things, and occasionally Berkshire gets a chance to do something,” he said. “It’s not because we’re smart…. I think we’re sane.”

Berkshire’s cash stake sank to around $106 billion from nearly $147 billion in the quarter, but Buffett said it was important to keep enough on hand.

“We will always have a lot of cash,” he said. “It’s like oxygen, it’s there all the time but if it disappears for a few minutes, it’s all over.”

Buffett also picked on a favored target, Wall Street, saying the stock market sometimes resembled a casino or gambling partner. “That existed to an extraordinary degree in the last couple of years, encouraged by Wall Street,” he said.

Abel defended Berkshire’s BNSF railroad, saying there was “more to be done” to improve operations and customer service, while Jain said Geico had lost ground to rival insurer Progressive Corp on telematics, which insurers use to track driver behavior and better match rates and risk.

Hours before doors opened at 7 a.m. CDT (1200 GMT), thousands of people began massing outside the arena.

Berkshire had projected lower attendance than in 2019, when it last held an in-person annual meeting, and about 10% to 15% of seats in the normally-full arena were empty.

“I bought a chair from Walmart so I could sit down,” said Tom Spain, founder of Henry Spain Investment Services in Market Harborough, England, who arrived at 3:15 a.m. CDT to attend his third meeting. “Everyone has been using it. Next year I might bring a massive container of coffee and give it out.”

Lauritz Fenselau, a 23-year-old owner of a software startup from Frankfurt, Germany, showed up at 4 a.m. CDT for his first meeting.

“Warren and Charlie are the priests. It’s like a pilgrimage,” he said. “I took three flights and 16 hours to get here, so I wanted to be here early.”

Andres Avila from Boston, a huge fan of Buffett, arrived in Omaha just five hours before getting in line at 4:45 a.m.

“I said: I’m already doing the trip for this. I just might as well get the best seat I can”, said Avila, carrying an umbrella to fend off the rain. “I have a bunch of my idols here.”

Shareholders will vote later on whether Berkshire should replace Buffett with an independent chair–he would remain chief executive–and disclose how its dozens of businesses promote diversity and address climate risks and mitigation.

Berkshire’s board opposes the proposals.

The meeting is being broadcast online at cnbc.com https://www.cnbc.com/brklive22.