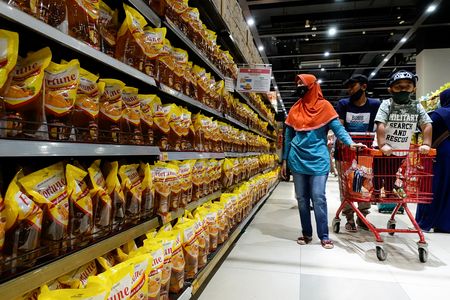 JAKARTA (Reuters) – Indonesia is prepared to widen its ban on exports of refined palm olein if it faces domestic shortages of derivatives used in the production of cooking oil, according to details presented at a meeting between government and industry officials.

RBD palm olein accounts for around 40% of Indonesia’s total exports of palm oil products, according to analysts’ estimates, which means the export ban could significantly affect export earnings in Southeast Asia’s biggest economy.

Indonesia typically exports about $2.5 billion to $3 billion of palm oil products per month.

The authorities will strictly monitor domestic supply of refined palm oil and crude palm oil, which are used as raw materials to make RBD olein, according to presentation slides.

“If there is shortage of refined palm oil, then further export bans can be carried out,” said one slide, which was presented to palm oil companies on Monday.

President Joko Widodo announced the ban on exports of cooking oil and its raw material on Friday to help control soaring domestic prices, but provided no details.

Indonesia’s announcement has sent global edible oil prices soaring as supplies were already choked by other factors such as drought and shortages from Russia’s invasion of major crop producer Ukraine.

Markets had previously thought the ban would cover a wider range of palm oil products, sending the rupiah as well as shares of Indonesian palm oil companies tumbling on Monday.

Indonesia’s economic affairs ministry held a meeting with cooking oil producers on Tuesday to discuss the export ban, according to an industry source.

Musim Mas, a Singapore-based private palm oil company, said the smaller scope of the ban showed the government was taking into account the impact on the industry and smallholder farmers.

However, Carolyn Lim, its senior manager for corporate communications, also said the smaller scope meant the ban could last longer.

“The duration that this will pan out, that’s going to impact markets too,” she said.

Some analysts expect the ban to be temporary due to limited domestic palm oil storage capacity.

The rupiah rebounded 0.35% by midday on Tuesday, while shares of local palm companies traded higher.

The Indonesian government has been criticised by some analysts and politicians for erratic policymaking to contain the rise in cooking oil prices, having already implemented and revoked an export restriction earlier in the year.

“These kinds of policy announcements that are not well communicated adds to some of the jitters that are already building,” said Nomura’s chief ASEAN economist Euben Paracuelles.

Malaysian benchmark crude palm futures, which had reversed its gains after details of the ban emerged on Monday, rose 2.8% by 0500 GMT.