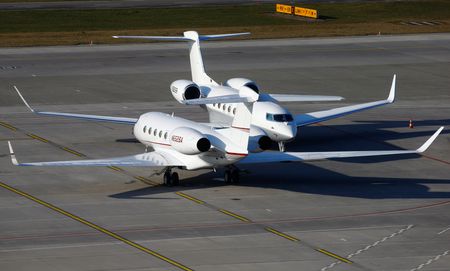 (Reuters) – Buyer “hysteria” for pre-owned business jets during the pandemic that triggered a recent wave of bidding wars is now easing, with more corporate aircraft coming up for sale, brokers say.

The uptick in supply of pre-owned jets from historic lows will be in focus as corporate planemakers Textron Inc, General Dynamics Corp’s Gulfstream and Bombardier Inc unveil earnings in coming weeks, with investors looking for any early signs of softening demand for new planes.

While U.S. business jet traffic remains above 2019 levels, the combination of listed planes and aircraft sold through word-of-mouth is giving buyers more choice, while price increases have at least temporarily flattened.

“The market is kind of taking a breath,” said Paul Kirby, Executive Vice President at QS Partners, a whole-aircraft brokerage and dealership. “You had this kind of hysteria that some buyers were going to miss the next airplane.”

Fueled by a cutback in commercial flights and crowded airports during the pandemic, the rush by wealthy travelers toward private transport was so marked last year and this past winter that some buyers were snapping up second-hand planes before fully inspecting the wares.

According to data from U.S.-based AMSTAT, a market research company specializing in business aircraft, the percentage of global business jets for sale on the preowned market was at 3.4% in April, up from a historical low of 3.3% in February.

A buyers’ market can dampen demand for new jets from planemakers like Gulfstream, Textron and Bombardier since buyers have more pre-owned options, and the price gap between old and new widens.

For example, Dwyer said he is bringing a pre-owned Bombardier Challenger 300 family jet to market that he predicts “won’t last two weeks.” But just a few months ago, it would have been snapped up before coming to market.

While the market remains strong, Kirby said some plane owners want to sell due to the challenge of finding pilots and parts as both U.S. business jet and commercial travel rebounds.

“Our clients are struggling to hire and retain qualified pilots, even at compensation levels well above historic averages,” he said.

(Reporting By Allison Lampert in Montreal; editing by Richard Pullin)