The Fed raised rates for the first time since 2018. This marked the end of the most aggressive economic rescue in America’s history.

The Fed projected seven rate hikes in 2022, a more hawkish stance than markets expected. This led to some selling pressure. However, we saw futures rip back higher during Fed Chair Jerome Powell’s conference call.

What did he say that got bulls excited?

The Fed released its communique and updated projections at 2pm ET. It raised rates 25 basis points which was widely expected. St. Louis Fed President James Bullard was the lone dissenter as he favored a 50-bps hike. This is in line with his prior comments. Members anticipate ongoing increases to the target range will be appropriate. We will address that in a moment.

The Committee expects to begin reducing its holdings of Treasury securities and agency debt and mortgage-backed securities at “a coming meeting”. This is a benign comment by design as it provides flexibility on how it unwinds the $9 trillion balance sheet.

“Inflation remains elevated, reflecting supply and demand imbalances related to the pandemic, higher energy prices, and broader price pressures”, according to the bank.

It replaced covid commentary with a discussion around the Russian invasion of Ukraine. The impact is uncertain, but FOMC members see heightened risk to inflation and economic activity in the near term.

FOMC members noted indicators of economic strength and employment continued to strengthen, the exact language used in the January directive. However, this did not match up with the new economic projections which saw the Fed cut GDP to a median projection of 2.8% compared to 4.0% in December.

The combination of the seven-rate hike outlook and lower GDP growth raised a red flag for investors and was the primary reason behind the early selling pressure.

The Fed raised its median projection of the Federal Funds Rate to 1.9% at the end of the year, well above the 0.9% predicted in December. The rate is expected to increase to 2.8% in 2023 compared to 1.6% in the prior forecast. Fed Chair Powell made clear that the FOMC remains data dependent and these are not final decisions.

The Fed’s “Dot Plot” shows the FOMC expects to see seven rate hikes this year. In his press conference, Powell noted there are seven meetings left which could suggest a 25-bps hike at each meeting. He did state that each meeting would be live. There is no preconceived notion on whether the Fed would look to front end load a 50-bps hike in an earlier meeting. That would depend on the incoming data and financial conditions.

12 of the 16 members see at least seven rate hikes in 2022. One Fed member saw the need for at least 12 rate hikes this calendar year (We assume that is Bullard). This was higher than the six-rate hike base line reported by the CME Fed Funds Futures.

All 16 members expect at least eight rate hikes though 2023 with the average outlook expecting 10 hikes over the two-year period. 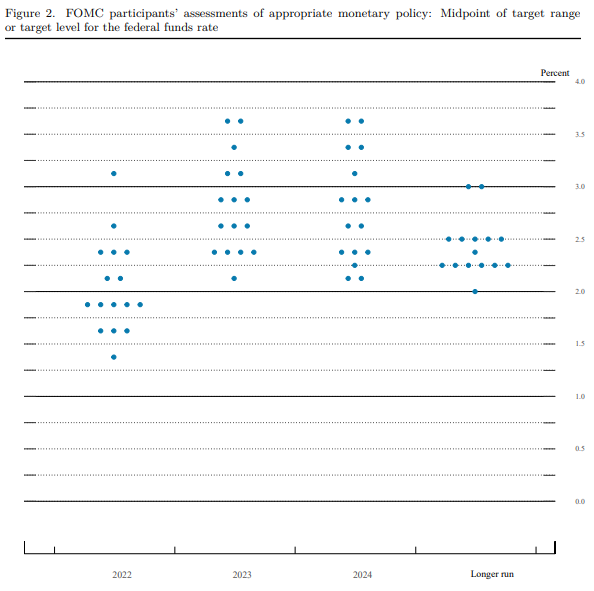 The Fed sees risk to GDP growth increasing to the downside: 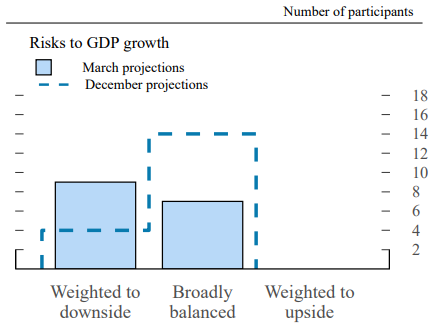 And finally, the Powell press conference

The indices were under pressure as the Fed Chair read his prepared remarks. The combination of the lower GDP outlook and more aggressive rate hike path led to worries around an overly hawkish monetary policy.

One of the key elements Powell hammered home was that the economy is strong enough to withstand this action by the Fed. I think participants found this reassuring compared to the dour projections posted just 30 minutes prior.

The Fed chair stated that the Committee made firm progress on a plan to reduce the balance sheet and that it could start implementing this plan in its May meeting. The actions would be dependent on financial conditions, but the market was happy to see the bank move forward on this topic.

Powell had chances to take the off ramp and lean on ‘data dependent’ commentary but pressed the idea that the central bank was moving forward with its tightening, the only question is around the pace. This is reassuring as markets can handle anything but uncertainty. Clarity, even when negative, at least allows participants to make proper risk adjustments.

I think the fears around inflation outweighed worries about higher rates. Market participants are willing to accept an aggressive move higher.

The Fed basically gave us a kitchen sink quarter, meaning it piled in ‘all the bad news’ for investors. Now there is direction and there is potential “dovish upside”. Meaning, it would be difficult for the Fed to get more hawkish. It is a 180 degree turn from last year when any hint of a rate hike led to negative market reaction. A key element here is that these rates have nearly been priced into markets.

The rate-sensitive Nasdaq reflects the three phases of this afternoon’s action. We saw Nasdaq rally to 13790 as we approached the lunch hour. Some profit taking led the index to 13744 as the Fed’s directive crossed wires. Futures dove to 13,463 in immediate reaction. This erased a rally that had started at 1:15am ET. The NQs would then rip back and rally approximately 480 points into the close!

To be clear, immediate reactions to Fed decisions do not tell the full story. In this instance, part of the move was certainly a short squeeze as the downward trend remains in play. We did see a disposition for investors to buy in the two sessions prior to today’s meeting. FOMO investors piled on top of the squeeze to drive that run into the close.

Now we are coming up to key resistance in the Nasdaq around 14,000-14,200. Part of the rally was due to Powell’s comments around the economy. This will be put to the test as we could be inline for weaker data in March due to supply chain issues around the Ukraine and China’s covid policies. The Fed’s credibility is in question after its disastrous ‘transitory inflation’ outlook. If we see data bring the ‘strong economy’ argument into question, then investors will be worried about a Fed miss step.

Usually, you want to see markets digest the Fed news for 24 hours before acting. Patience remains the prudent action as Wednesday’s move has the characteristics of a short squeeze/oversold bounce which can be common in a bear market. You may want to show some restraint before piling all your money back into the market. See how things unfold over the next 24 hours before making a quick decision. That said, there are signs of a firm bottom taking place.