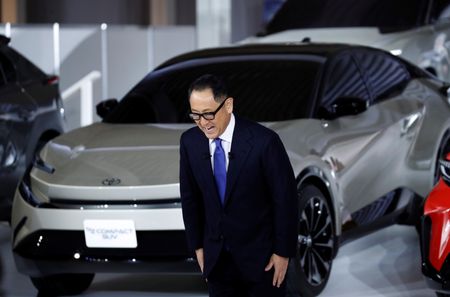 TOKYO (Reuters) – Toyota Motor Corp said on Thursday that Akio Toyoda will step down as president and chief executive to become chairman from April 1, and hand over the helm of Japan’s biggest automaker to its top branding officer, Koji Sato.

Sato will become the new CEO while the current chairman, Takeshi Uchiyamada, will drop his chairman title but remain on the board, Toyota said.

The issue of who would take over from Toyoda, the 66-year-old grandson of the company’s founder, had increasingly been a focus for investors.

Here are some reactions to the news:

“I myself was surprised. Ten out of 10 analysts had probably been thinking that Toyoda would carry on (as CEO) for a while, so that came as a huge surprise. I don’t know if now was the best timing for the change.”

“Because Sato is 53 – very young compared to many of the fellow executives – he wouldn’t be able to make any major shifts. But the fact that he succeeded Toyoda at that age suggests Sato may continue leading the company for the next decade, so the next few years would be just a kind of apprenticeship period for Sato as the president.”