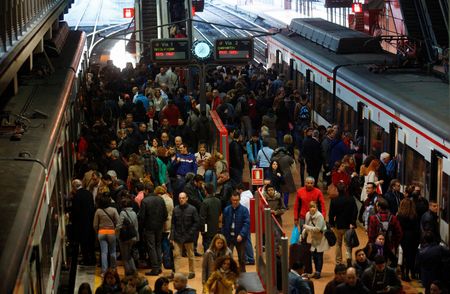 MADRID (Reuters) – Spain has launched a pilot project to help small and medium sized industrial companies cut the working week by at least half a day without denting salaries in an attempt to boost productivity.

The companies requesting the aid must design ways to increase productivity that compensate for wage cost overruns, the Industry Ministry said in a press release outlining the 10 million euro ($10.63 million) plan on Friday.

These improvements should be implemented within one year, while the company must maintain the programme for at least two years.

Debate over the so-called ‘Scandinavian model’, which holds that productivity will rise if working hours are dropped, is not new but it gained traction during the COVID-19 crisis among companies, the public sector and politicians.

In the first year of the project the government will partly finance wage costs of companies that reduce their working hours and will also help fund training and the cost of measures to improve productivity.

Only workers with full-time permanent contract can be a part of the programme, and women should be represented according to their share in a company’s workforce.

At least 30% of the workforce must reduce their working hours if a company has up to 20 workers, while if a company has between 21 and 249 employees at least 25% of its workers must be part of the plan.

Spanish telecom giant Telefonica has offered its employees the opportunity to work a four-day week, extending a pilot programme that initially involved about 150 workers, but in exchange for a 12% pay cut.