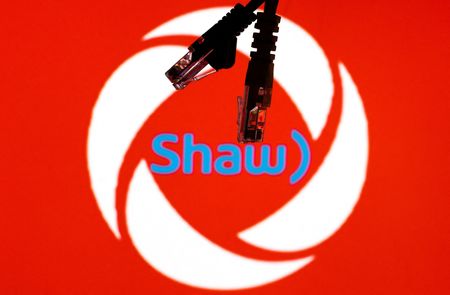 TORONTO (Reuters) -Canada’s competition tribunal chief on Monday said it would be difficult for the tribunal to reach a decision on Rogers Communications’ C$20 billion ($14.8 billion) acquisition of Shaw Communications within the December timeframe the companies requested.

Rogers’ proposed deal has been blocked by Canada’s antitrust bureau on grounds that it would lessen competition in a country where wireless charges are among the highest in the world.

After a series of failed settlement talks, the battle between Rogers-Shaw and the antitrust agency kicked off in Canada’s Competition Tribunal on Monday, which is expected to last at least four weeks.

“It will be difficult to get a decision within the time frame that respondents have requested,” Chief Justice Paul Crampton said in his opening remarks of the hearing.

Rogers-Shaw lawyers in past mediation sessions had requested a verdict to be issued by the end of this year, saying a delay would pose financial risks to the companies.

The deal launched in March 2021 is seen as a test case for the Canadian antitrust bureau’s ability to foster competition in a country where customers and advocates have complained about market concentration from industries ranging from telecoms to banks. Recently, the bureau acquired more powers from the federal government.

The Competition bureau, which is seeking to outright block the deal, said in its opening arguments that the companies have not demonstrated how the proposed divestiture of Freedom Mobile will improve competition.

It wanted the tribunal to reject the divestiture as a viable remedy and also issue an order blocking the Rogers-Shaw merger.

The hearing will have representatives from the Alberta provincial government, Quebecor, BCE Inc and Telus Communications.

Rogers and Shaw did not respond to Reuters queries on whether they will look for a settlement. The bureau said in an email to Reuters it remains firm in its decision to challenge the merger to protect the public interest.

During a Nov. 1 case management conference, the bureau said that it was opposing the deal in its entirety due to the overlapping of Shaw’s wireline and wireless assets.

“The competition bureau sees the Freedom proposal as a behavioural rather than a structural remedy, although it didn’t appear to us that the Tribunal necessarily agrees with such semantics,” Adam Shine, a telecom analyst with National Bank, said in a note on Nov. 1.

Canada’s Industry Minister Francois Philippe Champagne last month outlined the conditions for his department to consider the sale of Freedom Mobile to Quebecor, which the market interpreted as a sign that the government is prepared to approve Rogers’ deal for Shaw, that included sale of Freedom to Quebecor.

But the initial rally in shares of Rogers and Shaw reversed after the competition bureau subsequently made clear it will pursue the litigation.

Champagne has the final say on the deal.

Rogers-Shaw and Quebecor are racing against time to close the deal, as a delay poses financial risks, according to arguments made by the lawyers of Rogers-Shaw at the tribunal during a public hearing in late October.

Shaw’s lawyers have told the tribunal that there was a “very substantial risk” the transaction will be killed if the deal is extended after Jan 31., 2023, according to transcripts from the court hearings seen by Reuters.