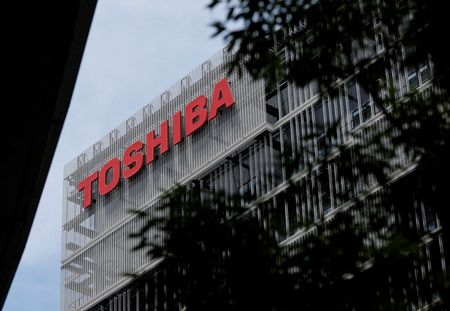 TOKYO (Reuters) – Disagreement over whether to keep Toshiba Corp’s management following a potential buyout caused friction between two of its suitors and is now stoking concern among banks, sources said, further complicating an already uncertain process.

Japan Industrial Partners, the private equity firm since selected by Toshiba as a preferred bidder, originally teamed up with state-backed fund Japan Investment Corp in a first round of bidding earlier this year.

But the two parted ways for the second round. Differences over JIP’s plan to retain Toshiba CEO Taro Shimada and his team were a source of friction between the two bidders, according to two sources familiar with the talks.

JIP’s plan has since raised alarm among some of Japan’s big banks, whose funding would be critical to financing a buyout of the $15 billion company, according to the two sources familiar with the talks and another person.

Some of those eyeing Toshiba are concerned that current management could impede the kind of sweeping reorganisation necessary to put it on the road to recovery, three of the sources said.

All of the sources declined to be identified because the information is confidential.

A representative for JIP was not immediately available for comment. Toshiba and state-backed JIC declined to comment.

The outcome of any deal could have far-reaching implications for Toshiba’s 116,000 employees and national security, given that the chips-to-nuclear conglomerate also makes defence equipment.

Once a giant of Japanese manufacturing, Toshiba has lurched from crisis to crisis since a 2015 accounting scandal. It has been weakened by years of discord between management and major shareholders, many of them foreign activists seen as keen for a buyout.

JIP, which previously bought out Olympus Corp’s camera business and Sony Group Corp’s laptop business, will continue to try to secure equity and financing commitments after the deadline, two of the sources said.

Toshiba’s Shimada told the Wall Street Journal in June he wanted any buyer to keep conglomerate in one piece as he aims to promote innovation at the 147-year-old company.

State-backed JIC, which has been in talks with U.S. private equity fund Bain Capital and north Asia fund MBK Partners to form a separate consortium, is also preparing to bid, but is unlikely to submit a binding proposal by Monday, two of the sources said.

The Japanese government owns 96% of JIC. The trade ministry has said the fund cannot spend taxpayer money on a deal just to take a company private and make things easier for management. Any investment would have to fulfil policy goals such as promoting restructuring, it has said.

JIC hopes to evaluate Toshiba’s businesses in more detail, including the impact of slumping global semiconductor demand on the value of Toshiba’s 40.6% stake in flash memory chip maker Kioxia Holdings Corp, one of the sources said.

In late October, JIC expanded the size of its buyout fund to 900 billion yen ($6.11 billion) from 200 billion yen. Two of the sources said the expansion was not just for a Toshiba buyout but also aimed at other deals.