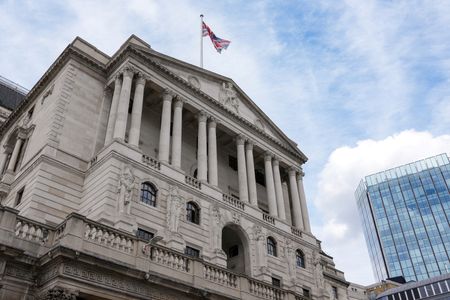 LONDON (Reuters) – The Bank of England raised UK interest rates to 3% on Thursday in its largest rate hike since 1989 and warned of a “very challenging outlook” for the economy.

Investors had fully priced in the possibility of the three-quarter point increase. Money markets showed traders now expect UK rates to peak at 4.6% by next September, compared to expectations of 4.8% just two days ago.

The pound initially tumbled after the decision, before paring some losses, while London-listed stocks cut losses and UK bonds also regained some ground.

BONDS: Yields on the two-year gilt were last up 2 basis points at 3.045%, compared with 3.064% before the BoE announced its decision.

“Markets had widely anticipated the hefty rate hike, particularly given the bank has had to make the move prior to the government’s fiscal statement after it was delayed until later this month.

“However, this latest move is actually significantly lower than it could have been given the furore caused by the mini-budget just a matter of weeks ago. The change of Prime Minister appears to have restored some calm to UK bond markets, and the BoE could take a smaller step as a result.”

“After the political and economic upheaval of the last few weeks, the Bank of England’s move to increase the base interest rate to 3% is an attempt to steady the ship, even if this requires sailing through a recessionary storm in order to get to the calmer waters on the other side.

“There is no doubt we are now looking down the barrel of a recession, which is unfortunately a necessary by-product of the policies required to restore fiscal credibility. The aim is stability in the long-term, as further highlighted by the bank beginning quantitative tightening, with the bank hoping the economy will rise out of the recession by this time next year.”

“What caught my eye is that while some central banks are saying they don’t know how high rates will go, the BoE is saying the peak is lower than what the market is pricing.

“Sterling could face some pressure against the dollar at least.”

“The pound has been slipping against the resurgent USD all morning but notably it has fallen against the EUR also following the BoE announcement and the perception that this was a dovish hike.

“With two members of the (Monetary Policy Committee) not willing to endorse the 75 bps rate hike this month and given the likelihood that the UK economy will be in recession the next time the BoE meets, the prospects of another 75-bps hike from the bank could appear to be too difficult an ask.”

“The move is as expected. We’re still looking over the next couple of years for rates to go to over 5%.

“What happens to the pace of quantitative tightening will be important.”

“Fiscal and monetary policy remains murky as we move towards year close, and this environment poses significant challenges for investors and financial advisers in the public markets.