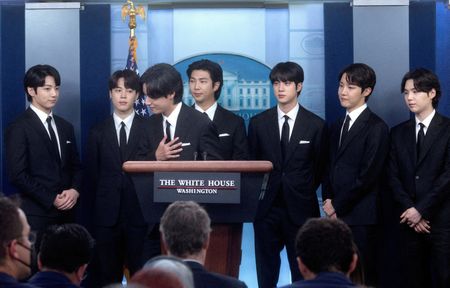 SEOUL (Reuters) – The announcement by K-pop mega band BTS that members would serve mandatory military service in South Korea has removed a cloud of uncertainty that has hung over their plans.

Investors in HYBE Co, BTS’ management group, responded to the news by driving its shares up as much as 7.8% on Tuesday.

The relatively shorter break, after the company picked 2025 as the potential date for BTS’ return as a group, also appeared to hearten the market.

“However, with the biggest moneymaker absent, the key (for HYBE) will be how much sales are made from new businesses,” including Ithaca Holdings, Ji added.

A South Korean pop culture phenomenon and success story, BTS have become a worldwide sensation since their 2013 debut. Their upbeat hits and social campaigns aimed at empowering youth catapulted the band as the world’s best-selling artists in 2020 and 2021, according to International Federation of the Phonographic Industry.

During the 2020 initial public offering of what is now HYBE, the seven members received a total of 64.6 billion won worth of common shares, or 9.23 billion won of shares each based on the IPO price.

Forbes estimated BTS had an annual income of $50 million as of 2020.

BTS’ economic impact will be partly eroded while the members carry out their military service.

The Korea Culture and Tourism Institute estimated that BTS’ 2020 No. 1 hit on the Billboard Hot 100 chart, “Dynamite”, had an economic impact worth 1.7 trillion won including direct sales and exports of related goods such as cosmetics and clothing.

The relatively short break for the members, however, has set at ease investors and fans alike.

“Demand will be maintained, as the vacuum that will be felt by the fandom is only about one year with members carrying out individual activities while enlisting sequentially,” NH’s Lee said.