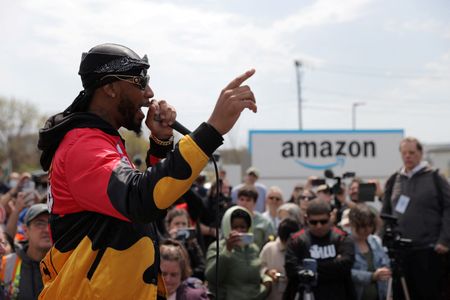 By Jeffrey Dastin and Akash Sriram

(Reuters) -Amazon.com Inc workers rejected organizing a New York state warehouse by a nearly two-to-one margin on Tuesday, handing another defeat to the fledgling labor union that had aimed to build momentum in its cross-country campaign.

At ALB1, the retailer’s fulfillment center in Castleton-on-Hudson near the state’s capital Albany, employees voted 406 to 206 against joining the Amazon Labor Union in the company’s fourth such contest of the year. Turnout was more than 64%.

Led by former Amazon employee Christian Smalls, the ALU this spring had delivered a first-ever victory for labor groups seeking to unionize Amazon in the United States, winning a vote in New York City at one of the retailer’s largest warehouses in the country.

An array of challenges since have shown that organizing America’s second-biggest private employer after Walmart Inc remains elusive. Unions for years have aimed to stem labor practices pioneered by Amazon that they find deleterious, like extensive vetting of workers’ productivity.

With Tuesday’s loss, Amazon workers have rejected forming unions three times this year, including at a second New York City facility and another in Alabama. The ALU cannot collectively bargain where it won this spring in the borough of Staten Island, either: a U.S. labor board director is reviewing objections to that contest by Amazon before certifying the result.

The Alabama election is not yet certified, either.

ALU representatives did not immediately respond to requests for comment.

Earlier on Tuesday, Smalls wrote on Twitter: “Regardless of todays results taking on a Trillion dollar company can never be a loss for workers. We will continue to empower all workers to give them the right to unionize.”

Kelly Nantel, an Amazon spokesperson, said, “We’re glad that our team in Albany was able to have their voices heard, and that they chose to keep the direct relationship with Amazon as we think that this is the best arrangement for both our employees and customers.”

The pro-labor administration of U.S. President Joe Biden and hundreds of organizing wins at Starbucks Corp have helped spark the recent union efforts. This month alone, the ALU petitioned to hold a vote in an Amazon warehouse in southern California, where there it will have a rally on Wednesday.

But Starbucks organizers have found a model that can be replicated while Amazon workers have not, said John Logan, a professor at San Francisco State University who studies anti-union actions.

A mix of national-union affiliation and grassroots support by young, progressive Starbucks workers has powered the coffee-chain campaign, said Logan. Winning at Amazon instead entails gaining traction in far-larger facilities which have employee turnover.

“Every campaign at Amazon is sort of less predictable,” he said. It is “always going to be more difficult to reproduce that organic leadership and set of circumstances that came together at Staten Island” during the pandemic’s outset. “But they still can win.”

The online retailer has deployed a long-successful playbook to discourage unionization. In the past year Amazon disparaged unions in bathroom signage as well as in workshops it required thousands of employees to attend. Its message that Amazon, not unions, could guarantee better wages may have resonated with workers in a turbulent U.S. economy.

Amazon recently raised its U.S. average starting pay for front-line staff to more than $19 per hour from over $18, which was the May 2021 median in the warehousing and storage sector.

Michael Pachter, an analyst at Wedbush Securities, said, “If workers feel they are fairly paid, they are less likely to unionize.”