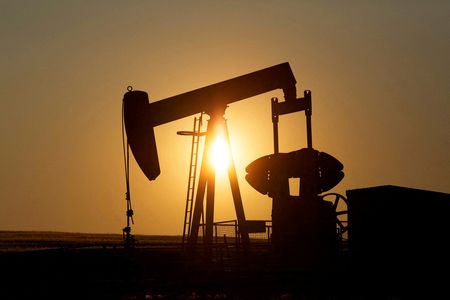 LONDON (Reuters) -Oil prices firmed on Thursday on the prospect that the OPEC+ producer group could curb oil supplies, but the more bearish possibility of an agreement that would return sanctioned Iranian oil exports to the market capped gains.

Comments on Monday by Saudi Energy Minister https://www.reuters.com/business/energy/saudi-says-opec-has-options-confront-market-challenges-including-cutting-output-2022-08-22 Prince Abdulaziz bin Salman about a disconnect between the futures and physical markets in which he flagged the possibility that OPEC+ could cut production helped to push oil prices to three-week highs.

“The suggestion that the price did not align with fundamentals and that OPEC+ could cut output has clearly had the desired effect,” Oanda analyst Craig Erlam said.

“It may also make the chance of a move back below $90 in the near-term hard to come by unless a nuclear deal is agreed upon and OPEC+’s appetite for cuts put to the test,” he added.

Talks between the European Union, the United States and Iran UPDATE 4-Iran reviews U.S. response to EU nuclear text for revival of 2015 pact – Reuters to revive the 2015 nuclear deal are continuing, with Iran saying it had received a response from the United States to the EU’s “final” text to resurrect the agreement.

Falling U.S. crude and product stockpiles added to the upward price momentum. Oil inventories fell by 3.3 million barrels in the week to Aug. 19 to 421.7 million barrels, steeper than analysts’ expectations in a Reuters poll for a 933,000-barrel drop.

The bullish impact was countered by a drawdown in gasoline inventories that was less than expected, reflecting weak demand.

U.S. gasoline stocks fell by 27,000 barrels in the week to 215.6 million barrels, compared with earlier expectations for a 1.5 million-barrel drop.