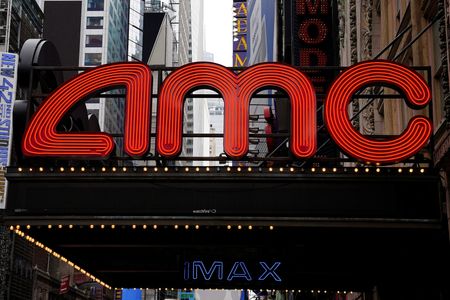 (Reuters) – AMC Entertainment Holdings Inc, the movie theater operator that investors have turned into a meme stock, completed the listing of its new preferred shares on Monday, setting the stage for a potential capital raise.

The novel move allows AMC to sell potentially billions of dollars worth of shares without requiring approval from its shareholders, as it seeks to capitalize on the popularity of meme stocks – shares traded mostly based on social media hype rather than their economic fundamentals.

Here is what you need to know about AMC’s new preferred shares.

WHAT ARE THE PREFERRED SHARES?

The preferred shares are a new class of shares that were given to holders of AMC’s common stock this month as a dividend. One preferred share was issued for each common share.

The preferred shares have the same voting power and right to a dividend as common shares. They can be converted into common shares on a one-to-one basis, but only if AMC’s board proposes this and AMC shareholders vote in favor of raising the number of authorized common shares to allow for the move.

WHY DID AMC ISSUE THE PREFERRED SHARES?

AMC said the new shares will be a “currency” that will allow it to raise money to pay down debt and carry out acquisitions and investments.

While it did not gain any proceeds from the issuance, AMC said it may sell preferred shares from now on, using the current listed preferred shares’ trading price as a benchmark.

The Leawood, Kansas-based company has declined to comment on when it might sell preferred shares to raise money. If it were to sell the 483.2 million at the listed preferred shares’ Monday closing price of $6, it would raise $2.9 billion.

AMC could sell common shares but it requires shareholder approval to do so. It did not need to seek shareholder approval for the preferred share issue because it relied on an authorization granted to its board by its former owner, China’s Dalian Wanda Group when it listed in 2013. Wanda is no longer an AMC shareholder.

In July 2021, AMC retracted a proposal for shareholders to approve the issuance of more common shares after it raised $1.8 billion by capitalizing on the meme stock frenzy. CEO Adam Aron cited investor opposition to more common stock sales, and AMC has not sought shareholder approval for a sale since.

AMC had warned that its common shares would drop as soon its preferred shares started trading on Monday because the stock dividend that delivered the preferred shares to investors acted as a stock split.

AMC’s common shares ended down 42% at $10.46 on Monday. This fall – equivalent to a $7.56 per share decline – was more than the $6 that the preferred shares ended trading at, reflecting concerns about the company’s future in the wake of peer Cineworld Group Plc’s warning of a possible bankruptcy.

AMC tried to boost the popularity of the preferred shares with investors ahead of their launch. It listed them in New York under the ticker ‘APE’, a popular social media reference to meme stock enthusiasts. It also gave investors a free “I OWN APE” non-fungible token (NFT).