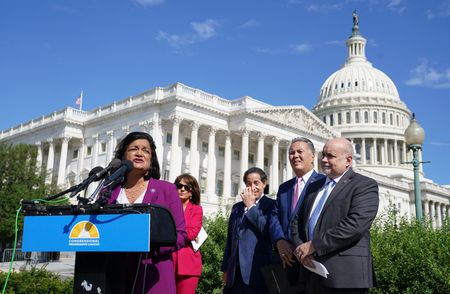 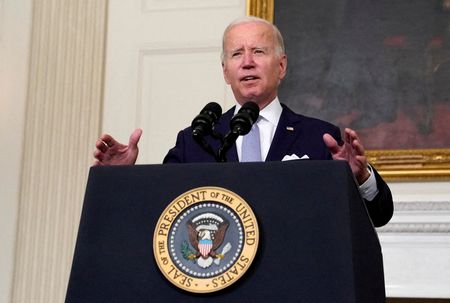 WASHINGTON (Reuters) -The Democratic-led U.S. House of Representatives approved a $430 billion bill on Friday that is seen as the biggest climate package in U.S. history, delivering a major legislative victory for President Joe Biden ahead of the Nov. 8 midterm elections.

The legislation to fight climate change and lower prescription drug prices aims to cut domestic greenhouse gas emissions. It will also allow Medicare to negotiate lower drug prices for the elderly and ensure that corporations and the wealthy pay the taxes they owe. Democrats say it will help combat inflation by reducing the federal deficit.

The House voted 220-207 along party lines to pass the measure titled the “Inflation Reduction Act” and send it on to Biden to sign into law. The Senate approved the legislation on Sunday after a marathon, 27-hour session.

Democrats hope the legislation will help them at the polls in November, when voters decide the balance of power in Congress ahead of the 2024 presidential election. Republicans are favored to win a majority in the House and could also take control of the Senate.

“It is a resounding victory for America’s families,” Pelosi declared just before the vote, describing the legislation as “a robust cost-cutting package that meets the moment, ensuring that our families thrive and that our planet survives.”

Biden plans to travel across the country to tout the bill along with a series of other legislative victories at a time when many voters have soured on him amid soaring inflation.

About half of Americans support the climate and drug pricing legislation, including 69% of Democrats and 34% of Republicans, according to a Reuters/Ipsos poll conducted on Aug. 3 and 4.

Business groups have had a mixed reaction to the legislation, which offers the prospect of higher tax bills for some companies while at the same time giving protections to the fossil fuel industry.

“Democrats more than any other majority in history are addicted to spending other people’s money, regardless of what we as a country can afford,” House Republican leader Kevin McCarthy said in a floor speech.

The bill has been more than 18 months in the making. It represents a final version of Biden’s original sweeping Build Back Better plan, which had to be whittled down in the face of opposition from Republicans and key legislators from his own party.

Investors looking to pour cash into clean energy products can expect at least a decade of federal subsidies through long-term tax credits for wind and solar and new credits for energy storage, biogas and hydrogen. Developers who use U.S.-made equipment or build in poorer areas will have additional support.

But the bill does not leave the U.S. fossil fuels industry out in the cold. Some provisions allow the federal government to authorize new wind and solar energy developments on federal land only when it is also auctioning rights to drill for oil and natural gas.

The fossil fuel protections disappointed progressives but posed no barrier to Democratic support.

“We don’t support the expansion of fossil fuel leasing,” said Representative Pramila Jayapal, who heads the Congressional Progressive Caucus. “But critically … independent analyses show that their impact will be far outweighed by the bill’s carbon pollution cuts.”

A $7,500 tax credit to encourage U.S. consumers to buy electric vehicles could not be used for most EV models on the market, according to major automakers, who warn that the legislation will put achieving U.S. EV adoption targets for 2030 in jeopardy.

To be eligible for the credit, vehicles must be assembled in North America, which would make some current EVs ineligible as soon as the bill takes effect.

The bill’s main revenue source is a 15% corporate minimum tax aimed at stopping large, profitable companies from gaming the Internal Revenue Service code to slash their tax bills to zero.