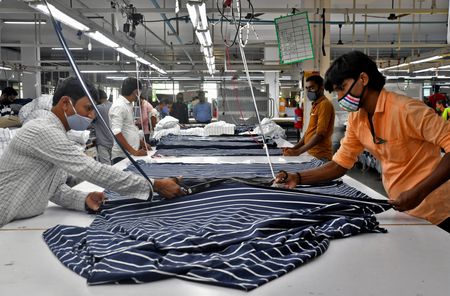 MUMBAI/DHAKA (Reuters) – A near doubling in benchmark cotton futures to 11-year highs, hard on the heels of a spike in freight and fuel prices, is clobbering Asian apparel makers while their global retail customers are reluctant to soak up the extra costs.

Losses have mounted for garment makers in Asia, among the region’s top employers, with some smaller units suspending operations, rendering thousands jobless, undermining a recovery from the pandemic and posing a fresh challenge for policymakers already battling high inflation.

To remain viable, some yarn and garment makers are even replacing cotton with cheaper synthetic fabric.

“Our factories are running at full capacity. But at what prices? We are hardly making any profits,” said Siddiqur Rahman, managing director of Dhaka-based Sterling Group, which supplies to brands such as H&M and Gap Inc.

An uncertain outlook for demand from Europe amid the Russia-Ukraine war has added to the woes of apparel makers in Asia – home to the world’s top garment exporters, China and Bangladesh.

Bangladesh exports more than 60% of the garments it manufactures to Europe, Rahman said.

In India, world’s top cotton producer, several small apparel makers are struggling to fulfil orders from three months ago, when cotton prices were around a third less than current levels.

India’s cotton prices have more than doubled in a year after rains hit harvest.

Global prices surged 70% over the period, scaling the highest since 2011 in May, with analysts predicting more gains amid drought damage to output in top exporter the United States and a recovery in China’s demand as COVID-19 curbs ease.

In a double whammy for garment makers, “buyers are not willing to raise prices”, said Ravi Sam, managing director at Adwaith Textiles, an Indian exporter. “They are also uncertain about summer demand, especially in Europe,” he added.

In southern India, which accounts for most of the country’s textile exports, spinning mills in May decided to stop producing yarn and procuring raw cotton, the South India Spinners Association said.

The shutdowns are hard for industry workers as many were unemployed during COVID lockdowns.

“Nearly 40% of the mills here have been shut since they are financially unviable,” said Duraisami, who goes by just one name and recently lost his job at a textile mill in the southern state of Tamil Nadu.

Like Duraisami, thousands in the area have lost their jobs in May, the state government has said.

Asian garment makers, which also count Walmart Inc and Nike among their customers, rely heavily on Europe and the United States for exports of ready-made garments.

While demand rose in the first quarter as the world emerged from the pandemic, fresh China COVID curbs and higher fuel prices amid the Russia-Ukraine conflict stifled it.

“The manufacturers are bearing the burden,” he said.

To cut expenses, some mills are using more synthetic fibre, which can cost $0.60-$1 a pound versus $1.4 for raw cotton.

“From what we hear from the mills in Asia, they are increasing spinning ratios in favour of polyester,” said Rogers Varner, president of Varner Brokerage in Cleveland, Mississippi.

But this swap has limitations given contractual commitments to deliver a certain quality of fabric.    “There will be some replacement … but you can’t just replace something because you don’t want to pay for it,” said Louis Barbera, partner and analyst at VLM Commodities Ltd.

Prices rose even as lockdowns hurt demand from China, which accounts for about a third of global cotton consumption, and they will climb further as the country resumes buying, a Singapore-based dealer with a global trading firm said.

For now though, China’s demand is bleak. Textile units are sitting on nearly a month’s inventories of yarn and cloth, versus the usual 10-15 days, a China-based trader said.

About 400,000 tonnes of Xinjiang cotton are being used per month, half of year-ago levels, the trader added.

But with the end to a strict lockdown in Shanghai, China’s largest city, at 1600 GMT on Tuesday, or midnight locally, industry players see demand improving.

Hot weather in Texas, which accounts for over 40% of the U.S. output, should also provide a tailwind for prices.

“If we do not get … multiple events of rainfall in west Texas, cotton prices will surpass current levels,” Barbera said.

This could eventually lift apparel prices, adding to inflationary pressures.

“I think cotton prices are rising all the way to the retail store. At some point people will just decide they can’t or will not buy,” said Keith Brown, principal at commodity firm Keith Brown and Co, Georgia.