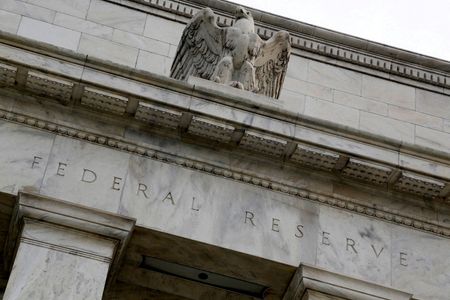 NEW YORK (Reuters) – Interest rate jitters keep hammering the U.S. bond market but some investors are starting to think a possible slowdown in price pressure as well as support from yield-seeking buyers could soon put a ceiling – or at least a pause – on rising yields.

U.S. Treasuries have had their worst start to the year in history and the selloff in parts of the curve continued last week after the U.S. Federal Reserve hiked its benchmark overnight interest rate by 50 basis points and announced it would begin to trim its balance sheet next month to counter unabated inflation.

Yet for some investors most of the inflation-driven weakness in bond markets has been priced in and, while there is still room for upside, yields could start subsiding soon, as financial conditions tighten on the back of the Fed’s actions.

“We’re probably getting closer to the peak in terms of yields,” said John Madziyire, a senior portfolio manager and head of US Treasuries and Inflation within Vanguard’s Fixed Income Group.

“Yields can still go higher as a function of the fact that volatility is so high, but we’re probably getting close to a point where we’re pricing in the highs in yields and buyers will start being more attracted to buying at these levels,” he said.

Brian Reynolds, chief markets strategist at Reynolds Strategy, pointed to 2018 and 2011 as “two highly emotional events in bond market history,” with 2018 marking investors being “frightened that the Fed was going to tighten to infinity” while 2011 was the year when the United States lost its triple-A rating.

Yields had already blasted past expectations. A March 29-April 5 Reuters poll showed that fixed income experts projected the 10-year bond will rise to 2.60% in a year.

After hitting 3.2% on Monday, however, yields have fallen back to around 3% in a flight to safety, as stocks plummeted due to concerns over rising interest rates and an economic slowdown in China after a recent rise in coronavirus cases.

“The momentum in the upwards push in interest rates seems to be slowing a bit,” said Mike Vogelzang, chief investment officer at CAPTRUST, also pointing to relatively stable yields on two-year U.S. government bonds, with prices having seemingly reflected the Fed’s planned rate hikes this year.

Two-year yields, which are particularly sensitive to changes in monetary policy, have inched lower since the Fed hiked rates last week, and the yield curve between two-year notes and 10-year bonds has been steepening sharply, from 18.9 basis points before the Fed’s hike to 44 basis points on Monday.

That part of the curve inverted in late March and then in April, sending a warning sign for investors that a recession could follow.

“The curve was pretty flat a month ago and it’s now steepened out … generally a steeper curve is healthy,” said Eric Stein, co-head of Global Fixed Income and chief investment officer at Morgan Stanley Investment Management.

“We’re starting to get to the conditions in place for yields to stop continuing to go up,” Stein said, pointing to a tightening of financial conditions and lower inflation expectations as measured by Treasury Inflation-Protected Securities.

For Jimmy Lee, chief executive officer of The Wealth Consulting Group, a wealth management firm, demand for 10-year notes will likely increase should they hit a 3.5% yield over the next two months.

“The pain is probably not over yet, but I’m sensing that we’re getting close,” he said.

“Between now and after those two hikes, I think there’s going to be some potential buying. I think fund managers are seeing value that they haven’t seen in a long time.”

For CAPTRUST’s Vogelzang, however, there is no sign in the market that an upper limit in yields is about to be reached, and the Fed’s balance sheet runoff, expected to start next month, could add further pressure.

“There’s too many outcomes that can take place that could really leave you in a bad spot,” he said.

(The story corrects last sentence to say “many” instead of “may.”)