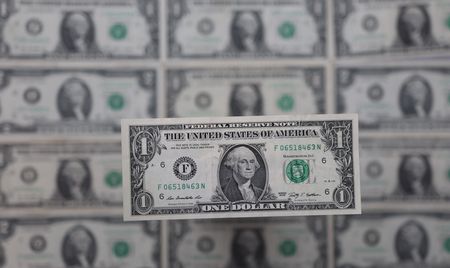 SINGAPORE (Reuters) – The dollar was nursing its sharpest fall in more than a month on Thursday after the U.S. Federal Reserve raised its benchmark interest rate by 50 basis points but poured cold water on the idea that even larger rises could lie ahead.

The U.S dollar index toppled from a five-year high and fell 0.9% overnight to 102.450. Antipodean currencies surged, especially the Aussie dollar, which enjoyed its biggest one-day percentage gain in over a decade as investors dialled back bets on the Fed staying ahead of Australia’s central bank.

Sterling rose more than 1% to $1.2605 and swaps markets are fully pricing a 25 bp hike from the Bank of England later in the day.

The Fed hike was the largest since 2000 as policymakers urgently tried to tamp down inflation. But at the press conference afterwards Chair Jerome Powell said Fed members aren’t actively considering 75-basis-point moves in the future.

Fed funds futures rallied to take some of the edge from markets’ aggressive outlook on U.S. rates, though a further 200 bps of hikes remain priced in for the rest of the year.

“The Fed simply could not (or, better, would not) hurdle the hawkish bar that the market had set,” Brian Daingerfield, head of G10 foreign exchange strategy at NatWest Markets, wrote in a note to clients.

“I don’t think it’s hyperbole to say that today represented the first ‘dovish’ surprise by the Fed relative to market expectations in over six months.”

The Aussie dollar’s 2.2% leap was its largest since late 2011 and followed a surprisingly hawkish turn from the Reserve Bank of Australia, which began its cycle of interest rate rises with a larger-than-expected 25 bp hike on Tuesday. [AUD/]

The dollar’s losses gave support to cryptocurrencies, too. Bitcoin had its best day in more than five weeks, rising 5% to sit just below $40,000.

Trade was thinned in the Asia session by a public holiday in Japan.