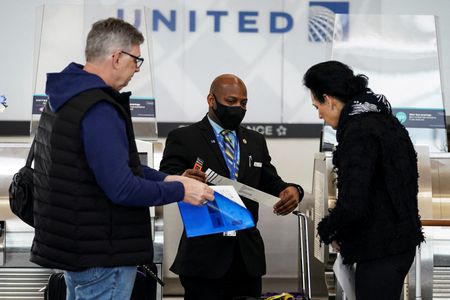 CHICAGO (Reuters) – United Airlines Holdings on Wednesday forecast a profit for the second quarter as it expects booming travel demand to generate the highest quarterly revenue in the company’s history.

After a speed bump caused by the Omicron-driven surge in COVID-19 cases early in the year, travel demand has surged back. U.S. passenger traffic has been averaging about 89% of pre-pandemic levels since mid-February, according to Transportation Security Administration (TSA) data.

As a result, United said it expects to post a profit this year. In the April-June quarter, its total revenue per available seat mile is projected to be up 17% compared with the same period in 2019, translating it into an adjusted operating margin of 10%.

Robust consumer demand is also allowing carriers to deal with soaring fuel costs, which have gone up 20% in the past month.

United’s fuel bill in the first quarter was 20% higher than during the previous quarter, leading to a slightly larger-than-expected loss. It is projected to increase by 19% quarter-on-quarter in the three months to end-June.

Fuel is the industry’s second-biggest expense after labor, but major U.S. airlines do not hedge against volatile oil prices like most European airlines. They typically look to offset fuel cost increases with higher fares.

United has said it is passing along a majority of its fuel cost to customers. The airline’s average fares are more than double what they were a year ago, according to data from Cowen.

The company also has adjusted its plans to ramp up capacity in a bid to boost its pricing power. In the current quarter, it expects its capacity to be down 13% from pre-pandemic levels.

United reported an adjusted loss of $4.24 per share for the first quarter, compared with analysts’ expectations of a loss of $4.22 per share, according to Refinitiv. The airline posted a loss of $7.50 per share a year ago, when the pandemic severely hit the travel industry.

The airline generated $7.57 billion in quarterly revenue, compared with $3.2 billion a year ago, but that was lower than Wall Street estimates of $7.68 billion.