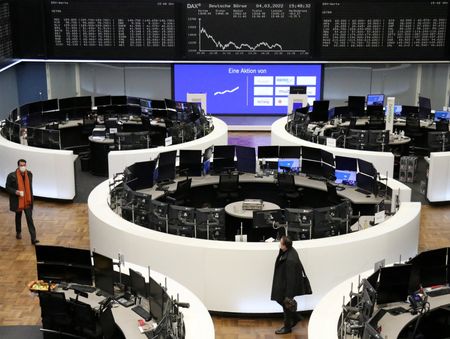 (Reuters) – European stocks hit a one-year low on Monday, with German and French shares set to confirm a bear market as the United States and Western allies weigh a ban on importing Russian oil, raising fears of a spike in inflation dragging economic growth.

The German DAX and France’s CAC 40 have shed more than 20% from their record closing highs on Jan. 5 and were on course to confirm bear market levels. The indexes were down 3.9% and 3.7% respectively for the day.

Strong gains in London’s mining and energy giants partially offset losses in the FTSE 100, which dropped 1.9%, while Italy’s FTSE MIB fell 3.7% and Spain’s IBEX was down 3.8%.

Brent crude prices soared to near $130 a barrel, their highest since 2008 after U.S. Secretary of State Antony Blinken said the United States and European allies were exploring banning imports of Russian oil in retaliation to its invasion of Ukraine.

London nickel prices soared as much as 30.7%, and other metal prices surged amid fears of supply disruption.

“If Europe indeed goes along with the U.S. in banning Russian energy, that would simply mean insufficient supply,” said Elwin de Groot, senior market economist at Rabobank in Amsterdam.

“They may try and look for other sources but in the very near-term we may continue to see a situation where governments have to step in and start rationing certain commodities.”

Russia supplies accounted for 17% of global natural gas consumption, 40% of Western European consumption as of 2021, according to a Goldman Sachs note.

A measure of volatility across euro zone stocks breached 50 points for the first time since the peak of the pandemic-fuelled sell-off in March 2020. It was last up 7 points at 56.65 points.

European oil and gas sector jumped 2.2%, while miners gained 1.4%, making them the only sectors trading in the black.

Leading the losses, retailers, automakers and banks fell between 5.3% and 5.6%.

The euro-zone bank index tumbled 6.7% to a 13-month low ahead of a European Central Bank meeting later this week, with mixed views about how the central bank will respond to the potential economic impact of the Ukraine conflict.

“For now, we would expect ECB to shift decisions further out into the year,” de Groot said.

Shares in UniCredit, Raiffeisen and Societe Generale, among banks exposed to Russia, all fell about 10%.

(Reporting by Sruthi Shankar in Bengaluru; Editing by Sherry Jacob-Phillips and Vinay Dwivedi)