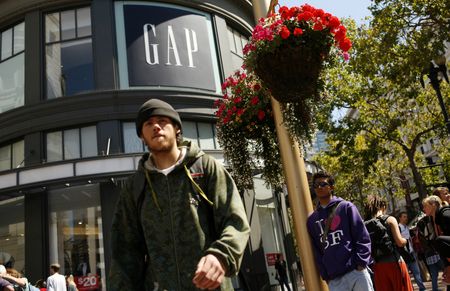 RALEIGH, N.C. (Reuters) -Clothing retailers such as Express and Gap that stashed away mountains of unsold basics during the coronavirus pandemic now are slashing prices on clearance merchandise in a last-ditch effort to clear clothing racks.

But the deep discounts they’re dangling on out-of-season clothing may not appeal to inflation-weary shoppers such as Elieth Chaparro, 30.

At the Crabtree Valley Mall in Raleigh, North Carolina, Chaparro, whose goal was to find a discounted winter coat, wasn’t thrilled with the Gap clearance section, where she found spring or summer merchandise including jean shorts and patterned crop tops priced under $15.99.

“The fabric looks like it’s been there for a while,” she said, referring to a short-sleeve pink blouse on the rack.

Retailers including Express Inc and Gap Inc have held on to older merchandise, from as far back as last holiday season, with the hopes of selling the inventory this fall.

“If you lower the price enough, you’ll get rid of it,” said Eric Beder, chief executive of Small Cap Consumer Research.

At risk are retailers’ margins during the critical holiday shopping season and their efforts to be the go-to location for trendy fashions.

Jessica Ramirez, an analyst at Jane Hali & Associates who frequently does store checks, has been seeing summer clothing on Gap’s racks for weeks. Retailers placing past-season merchandise is “not a good sign” for profit margins or customer engagement at a time of slowing demand for clothing, she said.

“Shoppers are buying to wear right now,” Ramirez added, so having items that customers immediately want and need is crucial.

Shopper demand has put a strain on apparel retailers throughout the year, boosting inventories and forcing retailers including Gap, Victoria’s Secret and Kohl’s, to slash prices.

After receiving holiday items too late for 2021, the retailers also began ordering seasonal items earlier in 2022 to avoid supply-chain mishaps, but found themselves struggling with lower demand from customers strained by rising costs of gas and groceries.

Express, which reports third-quarter earnings on Thursday, saw total inventory increase 29.9% year-over-year in the second quarter and 40% in the first, after bringing in late holiday merchandise. Sequined blazers and pants from last holiday season are now on store floors, Express told investors in November.

Express on Tuesday offered online and some in-store holiday sales with 30%-50% off on all items, with an extra 50% off on clearance items such as cami tops and animal print maxi dresses. The sales come months after the company said it would offer more promotions to clear inventory.

Deals since October and over Thanksgiving weekend were up in both frequency and discounting depth, including from clothing retailers, according to research from Jane Hali & Associates. Some started promoting at higher levels earlier than last year.

General apparel was the most discounted category between Thanksgiving through Cyber Monday, according to Salesforce data on Tuesday, with discounts averaging about 34%.

Gap also warned investors in November that carrying summer merchandise into the fall was a “margin drain,” and now some of those styles are still on Gap’s racks, according to store checks.

In mid-November, Gap Chief Financial Officer Katrina O’Connell said it expects to enter 2023 with lowered inventories, even if it must slash prices. She said that holding on to unsold inventory would “use up cash” in the short term and that the company is focused on clearing old merchandise by the new year.

To be sure, getting rid of old clothing by 2023 could help Gap and Express free up space for trendy merchandise that shoppers are willing to buy and will cut costs on warehousing.

Gap’s clothing stock for the third quarter ended Oct. 29 was 12% higher, with 9 percentage points being what Gap executives call “pack and hold” merchandise — stored away “slow-turning” basics, including tee-shirts and shorts, that would eventually return to sales floors.

Gap’s profit margin’s fell to 38.7% in its third quarter from 41.9% a year earlier, significantly impacted by markdowns. Wall Street expect Gap’s margins to rise to 34.61% in the holiday quarter from 33.66% last year.

Express’ third-quarter margins are expected to fall to 29.7% from 33.22% a year earlier, according to analysts’ estimates on Refinitiv.