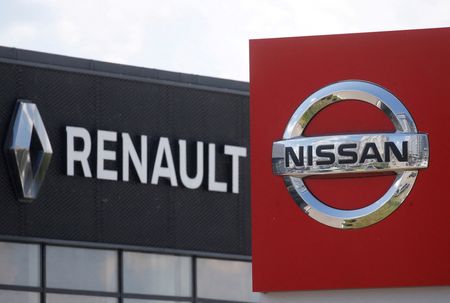 TOKYO (Reuters) – Automakers Renault and Nissan are set to forgo an announcement on Dec. 7 of a new deal on their restructured alliance as they struggle to bridge their differences, Japanese TV network JNN reported on Friday.

Both sides are involved in discussions to restructure their alliance. Renault is looking to Nissan to invest in its EV business, while Nissan is seeking the sale of part of Renault’s 43% stake in Nissan to put the two partners on a more equal footing.

The two parties decided to forgo an announcement on Dec. 7 as they had not reached an agreement as of Friday on how to share intellectual property, JNN said.

There are no new plans on when to make an announcement, the reported added. It was not clear from the report whether JNN was citing a single source or multiple sources.

Neither Renault nor Nissan immediately responded to a request for comment.

Reuters previously reported that both parties had raised Dec. 7 as a possible date for an announcement of the new alliance structure.

The question of how to share technology and intellectual property has proved to be a sticking point in the talks.