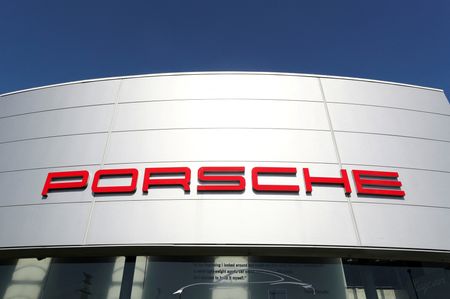 BERLIN (Reuters) – Volkswagen shares were up 3% in premarket trade on Monday, topping the German blue-chip index, after the carmaker said on Sunday it was targeting a valuation for luxury sportscar brand Porsche of up to 75 billion euros ($74.84 billion).

Volkswagen announced on Sunday night it would price preferred shares in the flotation of Porsche AG at 76.50 euros to 82.50 euros per share, translating into what could be Germany’s second-largest initial public offering in history.

A prospectus with further details on the listing is expected to be published on Monday afternoon.

In line with Volkswagen’s agreement earlier in September with Porsche SE, 25% plus one ordinary share in the sportscar brand, which do carry voting rights, will go to Porsche SE at the price of the preferred shares plus a 7.5% premium.

Porsche SE will finance the acquisition of the ordinary shares with debt capital of up to 7.9 billion euros, it said in a separate statement.

Total proceeds from the sale will be 18.1 billion to 19.5 billion euros. Once the IPO goes ahead, Volkswagen will call an extraordinary shareholder meeting in December where it will propose to pay 49% of total proceeds to shareholders in early 2023 as a special dividend.