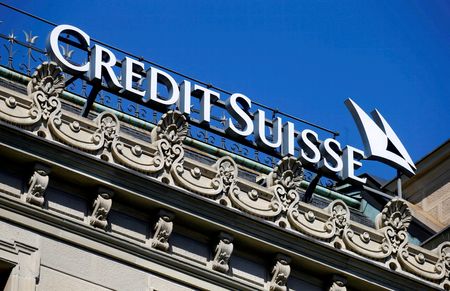 ZURICH (Reuters) – A group of Credit Suisse investors pushing for faster climate action at the Swiss bank has more than doubled in size, raising pressure on its board ahead of its annual shareholder meeting on Friday.

Credit Suisse, along with other major banks, is under pressure from investors to stop financing fossil fuel development to limit climate change and to help businesses to shift away from a high-carbon economy.

Credit Suisse moved to set new targets to reduce emissions connected to its loan book, but the investors said they did not go far enough.

Now, other shareholders have joined the group planning to back the climate resolution, including Legal & General Investment Management and Aviva Investors. There are now 31 investors, with combined assets under management of more than $5 trillion, which have pre-declared their support.

The need for quicker action to rein in emissions has been rammed home by U.N. climate scientists who said the window for action to forestall the worst effects of global warming was rapidly closing.

“Given the systemic risk posed by climate change, it’s essential that businesses such as Credit Suisse take swift action to ensure they are part of the solution,” said Jane Firth, head of responsible investment at Border to Coast.

“By supporting this shareholder resolution, we hope to see Credit Suisse take tangible steps to ensure its disclosures and targets cover all capital market activity, ensuring it is on a timeline consistent with the Paris agreement.”

The resolution, coordinated by responsible investment NGO ShareAction and the Ethos Foundation, with the support of the Swiss Association for Responsible Investments, will be the first such shareholder resolution to be put to a Swiss company.

“We applaud the investors that have today pre-declared their support for the shareholder-led resolution on climate risk at Credit Suisse,” said Jeanne Martin, senior campaign manager, ShareAction.

“Voting for this resolution sends a strong signal to the bank that investors expect it to publish a science-based climate strategy that covers all its main financing activities. We call on other investors to follow suit.”

Switzerland’s second-biggest bank will face scrutiny on multiple fronts at Friday’s meeting, with proxy advisers recommending shareholders reject the board’s request to discharge managers from liability for the 2020 financial year over a series of costly scandals. Another shareholder is group seeking a special audit of the bank’s actions.

The bank has since also warned it will report a first-quarter loss on Wednesday.