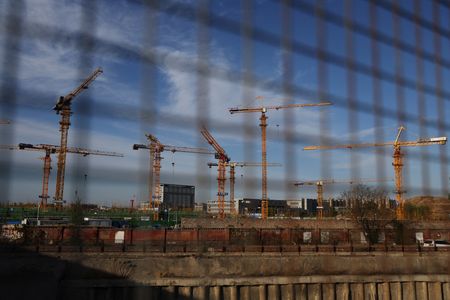 BEIJING (Reuters) -China’s economy grew at a faster than expected clip in the first quarter, data showed on Monday, expanding 4.8% year-on-year, but the risk of a sharp slowdown over coming months has risen as sweeping COVID-19 curbs and the Ukraine war take a heavy toll.

The downturn in activity was evident in March indicators, which showed a sharp hit to demand and suggests a hard grind ahead.

Gross domestic product (GDP) in January-March had been forecast to expand 4.4% from a year earlier, according to a Reuters poll of analysts, picking up from 4.0% in the fourth quarter last year.

On a quarter-on-quarter basis, GDP rose 1.3% in January-March, compared with expectations for a 0.6% rise and a revised 1.5% gain in the previous quarter.

Heightened global risks from the war in Ukraine, widespread COVID-19 lockdowns and a weak property market are putting a choke hold on the world’s second-largest economy, and some economists say the risks of a recession are rising.

Separate data on March activity showed retail sales plunged last month on an annual basis on widespread COVID curbs across the country. It fell 3.5%, well below expectations for a 1.6% decrease and an increase of 6.7% in January and February.

The industrial sector held up better than expected with production expanding 5.0% from a year earlier, compared with forecasts for 4.5% gain. That was still down from a 7.5% increase seen in the first two months of the year.

Fixed asset investment increased 9.3% year-on-year in the first quarter, compared with the 8.5% increase tipped by the Reuters poll but down from 12.2% growth in the first two months.

Analysts say April data will likely be worse, with lockdowns in commercial centre Shanghai and elsewhere dragging on.

The job market is already showing signs of stress. China’s nationwide survey-based jobless rate stood at 5.8% in March, the highest since May 2020, and up from 5.5% in February.

The government’s determination to stop the spread of record COVID-19 cases has clogged highways and ports, stranded workers and shut countless factories – disruptions that are rippling through global supply chains for goods ranging from electric vehicles to iPhones.

Late on Friday, the People’s Bank of China announced it would cut the amount of cash that banks must hold as reserves for the first time this year, releasing about 530 billion yuan ($83.25 billion) in long-term liquidity to cushion a sharp slowdown in economic growth.

The move was largely expected after the State Council, or cabinet, said on Wednesday that monetary policy tools – including cuts in banks’ reserve requirement ratios (RRRs) – should be used in a timely way.

The government has unveiled more fiscal stimulus this year, including stepping up local bond issuance to fund infrastructure projects, and cutting taxes for businesses.

But analysts are not sure if rate cuts would do much to arrest the economic slump in the near term, as factories and businesses struggle and consumers remain cautious about spending. More aggressive easing could also trigger capital outflows, putting more pressure on Chinese financial markets.

China has targeted slower economic growth of around 5.5% this year as headwinds gather, but some analysts say that may now be tough to achieve without more aggressive stimulus measures.

(Reporting by Kevin Yao and Stella QiuEditing by Shri Navaratnam)