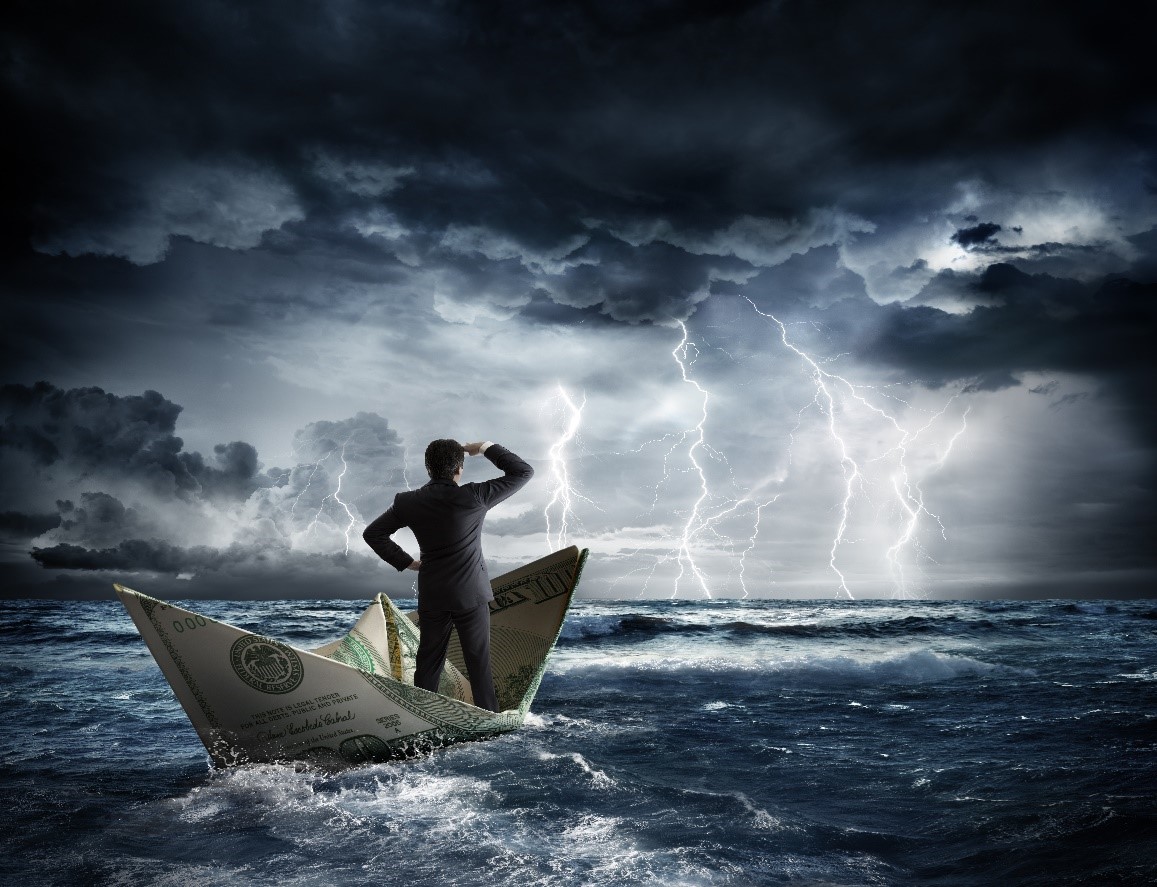 The Guns of August is a historical non-fiction novel penned by Barbra Tuchman. It centers around the developments in the month leading up to World War I.

It studies the French and German 1914 preparations for a war based on assumptions around the Franco-Prussian War in 1870. What they did not consider was how the world had changed in the 45 years since their last entanglement.

Russian President Vladimir Putin could be traveling down the same path as globalization of the world’s economy is providing countries and citizens new levers to inflict pain on aggressors.

The United States and its Western allies have placed targeted sanctions on Russia to weaken its war-making capabilities and trigger chaos in the $1.6 trillion economy.

The group excluded several Russian banks from Swift, a global messaging network that is critical to the international payments system, choking the country from the financial system. The Western bloc avoided slapping sanctions on banks that were critical to oil and gas deliveries but there is a domino effect leading to a halt in shipments.

Governments blocked the Russian central bank from using its reserves of dollars and other currencies to support the ruble. Thus, the ruble has been crushed, falling to all-time lows. Here is a chart of the Ruble/USD which reads as the number of rubles that is equivalent to $1. As you can see $1 can get you 117 rubles compared to the 70 rubles ahead of the crisis! 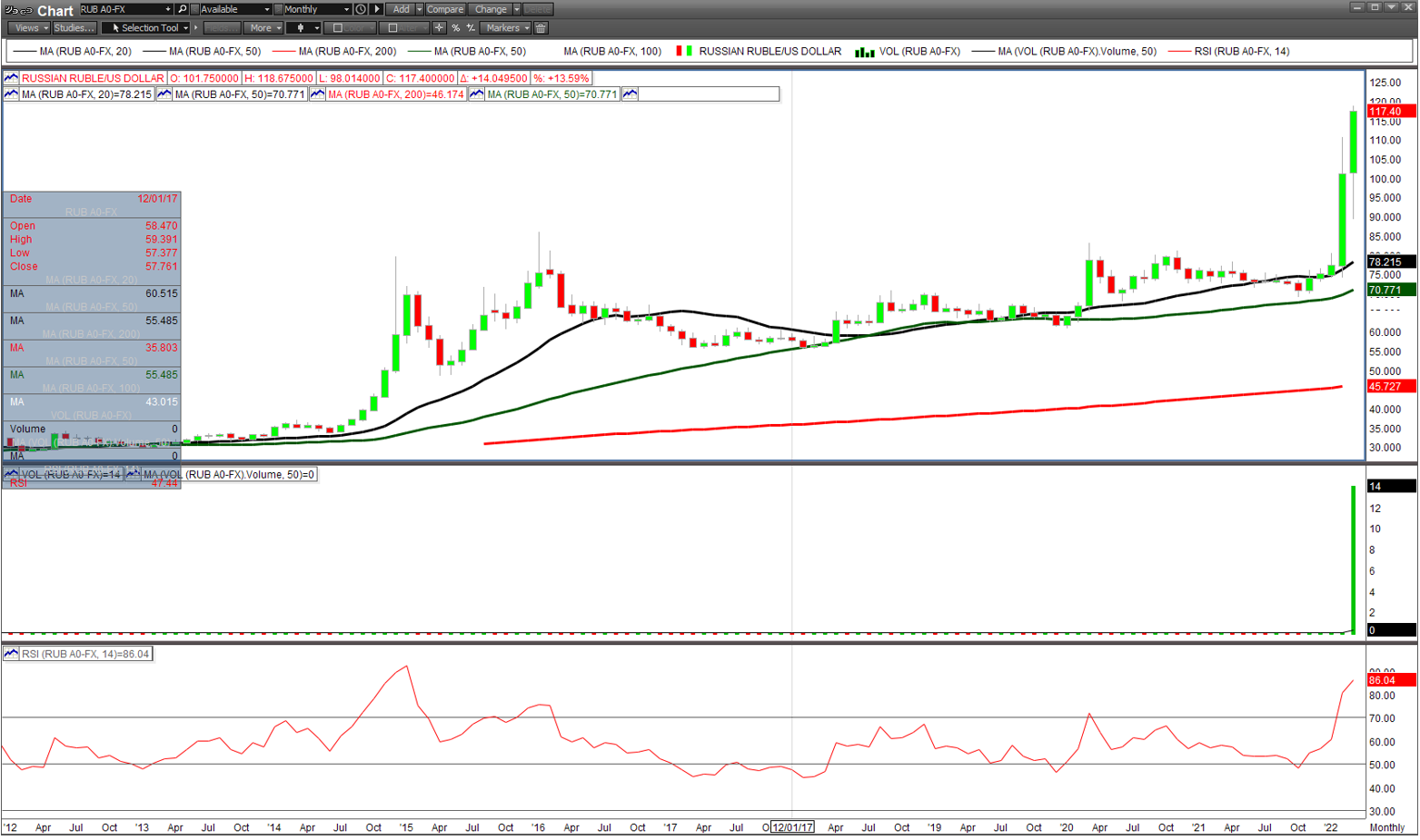 Governments are not the only entities acting. Market participants have been dumping Russian assets at mindboggling rates.

The Russian stock market has been closed for three days by order of the country’s central bank. However, dollar-denominated listings of Russian companies have not avoided the global wrath. Russian companies that were valued at over $100 billion have been turned into penny stocks as stock traders in London dump positions.

Shares of Russia’s largest bank Sberbank have collapsed 99%, falling from $14 in mid-February to one penny. It fell 85% in one day! Oil giant Rosneft fell 90% and now trades under a dollar. Another oil giant Lukoil tumbled 99.7% and is trading at 25 cents. Natural gas behemoths Gazprom and Novatek are both down over 99%.

Equity index provider MSCI reclassified its Russian index from “emerging markets” to “standalone markets” status, calling Russia’s stock market “uninvestable” due to the harsh sanctions. The action was taken after consulting with numerous institutional investors. MSCI said it would continue to follow developments.

Then there is the corporate world. Companies have been taking steps to syphon the Russian people off the global economy. In 1943, if you told a German you were cutting him off from an iPhone or new sneakers he would laugh in his schnitzel and head back to the front line. The World has changed, and these international products are easier for consumers to acquire. Sanctions do have weight as it impacts the citizens at home by cutting them off the global economy.

Here are some actions corporations are taking:

These corporate moves are just the tip of the iceberg. Russia has been cut off from the world economy. This is an instant immiseration of a major global economy. The actions are unprecedented, and its impact will lead to market uncertainty.

Maersk said it started, “seeing the effect on the global supply chain flows such as delays, detention of cargo by custom authorities across various transhipments hubs, unpredictable operational impacts”. That is not an encouraging statement given the supply chain issues we have experienced over the last 12+ months.

Another question is how does this impact China? Will it recalculate the costs of war if it decides to invade Taiwan? Do they push forward and try to create their own payment system to avoid the economic pains the West can impose?

These are questions that will be asked once we start to emerge from the latest military episode. One thing is for sure, the globalization of the economy has put new pawns onto the battlefield. This will be a case study for military experts and economists to dissect for years to come.