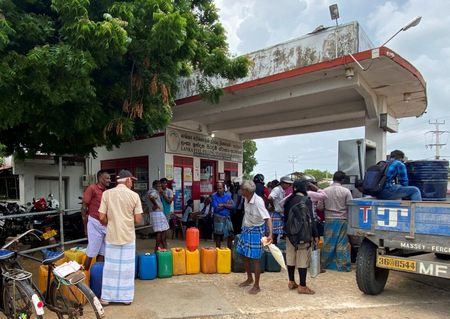 COLOMBO (Reuters) – Crisis-hit Sri Lanka has reached a preliminary agreement with the International Monetary Fund (IMF) for a bailout, four sources with direct knowledge of the plan have told Reuters.

The debt-laden country has been seeking up to $3 billion from the global lender in a bid to escape its worst economic crisis since independence from Britain in 1948.

Sri Lankans have faced acute shortages of fuel and other basic goods for months, leaving it in political turmoil and inflation which is now soaring at almost 65%.

The sources, who declined to be named ahead of an official announcement planned for Thursday, did not say how much money Sri Lanka might get but optimism around the news sent the country’s bonds to their highest level in two months.

The IMF said its team, that has been in the country for a week, had extended its stay by a day and that a news conference would be at the Sri Lankan central bank on Thursday.

“The IMF Mission in Colombo has been extended by one day because discussions are still ongoing with the authorities,” the IMF said in statement.

The government did not respond to requests for comment, although Sri Lanka’s new President Ranil Wickremesinghe had told its parliament during a budget presentation on Tuesday that talks with the IMF had reached the final stage.

Staff-level IMF agreements, as they are known, need to get formal approval of its management and executive board before recipient nations get any funding.

The IMF team held talks with government officials, including the treasury secretary, late into the night on Tuesday to address concerns on the political front, the sources said.

Many of the more technical issues had been agreed to beforehand they added, although political analysts and investors expect the IMF will now also need to see signs that India, China and Japan that have lent to Sri Lanka remain supportive.

Government bonds, which are now in default, jumped as much 3.7 cents on the dollar too although most remain at just a third of their face value and have yields of around 50% on expectations that much of the money will have to be written off.

Sri Lanka was plunged into full-blown crisis last month when then-president Gotabaya Rajapaksa fled amid a popular uprising against its economic collapse.

Rajapaksa was replaced by Prime Minister Wickremesinghe, who also heads the finance department and has held several rounds of talks with the IMF team.

The country also needs to restructure nearly $30 billion of debt. Japan has offered to lead talks with the other main creditors including India and China.

It will also need to strike a deal with international banks and asset managers that hold the majority of its $19 billion worth of sovereign bonds, that are now classed as in default.

“I think there will be quite a few prior actions that will be necessary (before the IMF’s money is disbursed),” said Carlos de Sousa at Vontobel Asset Management, one of the funds that bought Sri Lankan bonds.

He cited progress such as plans for an immediate VAT increase but cautioned that the IMF would also want to see greater independence given to Sri Lanka’s central bank, as well as progress on the India, China and Japan issue.

“That will probably take a bit longer,” de Sousa added. “We are not there yet.”

Sri Lanka’s debt had soared to unsustainable levels in the run up to the crisis. Years of populist tax cuts had depleted finances. The COVID-19 pandemic then hammered its tourism sector and slashed remittances from workers overseas.

The damage was compounded further by a ban of fertilisers that hit the farming industry and then over the last year by soaring oil and food prices.

Mark Bohlund, senior analyst at Redd Intelligence, said the agreement puts pressure on the main creditors to come up with financing assurances so the IMF can approve the program and funds can be disbursed.

“I’m optimistic that the financing assurances can be found relatively quickly,” he said, noting Sri Lanka’s geopolitical importance for the creditors.