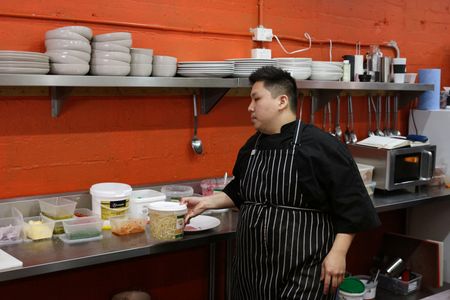 By Praveen Menon and Sam Holmes

SYDNEY (Reuters) – A blowout in visa processing times in Australia has left about a million prospective workers stuck in limbo, worsening the acute staff shortages that have crippled businesses and dampened economic sentiment.

Strict border controls for two years and an exodus of holiday workers and foreign students have left corporate Australia struggling to fill jobs and keep their businesses going.

However, a seemingly simple solution to the problem of letting more migrants enter has hit a roadblock due to a backlog of over 914,000 applications for permanent and temporary visas as of Aug. 12, according to immigration data seen by Reuters.

Of these, about 370,000 are visas in key temporary categories of visitors, students and skilled visas that are key for the country’s economic recovery. It also includes applicants already in Australia and looking to change their visa status to a more permanent one.

The delays are largely due to resource shortages at immigration offices and a huge backlog of applications that were left unattended for two years as the pandemic forced the government to seal the borders.

Australia’s labour squeeze comes as competition for skilled labour intensifies around the world, especially in industries where the COVID-19 pandemic forced employers to cut jobs or push staff to work remotely.

Industrialised nations like the United States and others in the EU and Asia have been looking to loosen immigration rules and sweeten offers to attract the best talent. New Zealand is also making temporary changes to immigration rules to fill a labour gap

The new Australian government led by Prime Minister Anthony Albanese is bringing together politicians, business, unions and others to thrash out the problem at a national Jobs and Skills Summit this week.

“The Government acknowledges the importance of immigration and visitors in addressing current labour shortages and stimulating economic activity,” a spokesperson for the Department of Home Affairs told Reuters.

“We are committed to reducing on-hand visa applications to pre-COVID-19 levels, and have ramped up activity to accelerate processing times,” the spokesperson added.

The department has brought more than 180 new staff into visa processing roles since May to tackle the massive backlog. In the last two months it has managed to process nearly 1.14 million applications of people who are outside Australia.

But with more than 600,000 temporary visa holders leaving the country since the pandemic, a lot more needs to be done to fill the large gaps in the health, construction and hospitality industries.

Albanese’s government has blamed the previous administration for the delays.

“The former Government devalued immigration, with the visa application backlog increasing to nearly 1,000,000 on their watch,” Immigration Minister Andrew Giles said in a statement in July.

According to recent government data, for the first time, there are more jobs in the Australian market than job seekers. Wage growth rose at the fastest pace in almost eight years in the second quarter, and the unemployment rate hit a fresh 48-year low in July.

Meanwhile, the wait for those wanting to get to Australia has been excruciatingly long. Migration agents who spoke to Reuters complained that waiting periods for various types of visas can go up to six months or more.

Australian companies facing losses, and in some cases closure, are resorting to desperate measures to attract and retain talent.

A Sydney cafe rented an electronic billboard on a main highway to advertise its vacancy.

“No Nights. No Weekends,” said the advertisement for a head chef.

“The investment was higher than we would usually spend, but we felt we had no choice but to try an unusual measure under an extreme circumstance,” Bannister said.

The cafe was eventually successful in hiring a chef who found out about the position through the billboard.

Coal miner Whitehaven Coal said last week it would build its own residential properties in remote areas, to attract talent to sites that are not near adequate housing.

“I don’t see it easing at all. If anything, it is continuing to tighten,” Whitehaven managing director Paul Flynn told of the skills shortage in a media briefing.

“We have the added dimension of being considered remote by some people and when there are competing opportunities in cities, then we have to do something a little different,” he said.