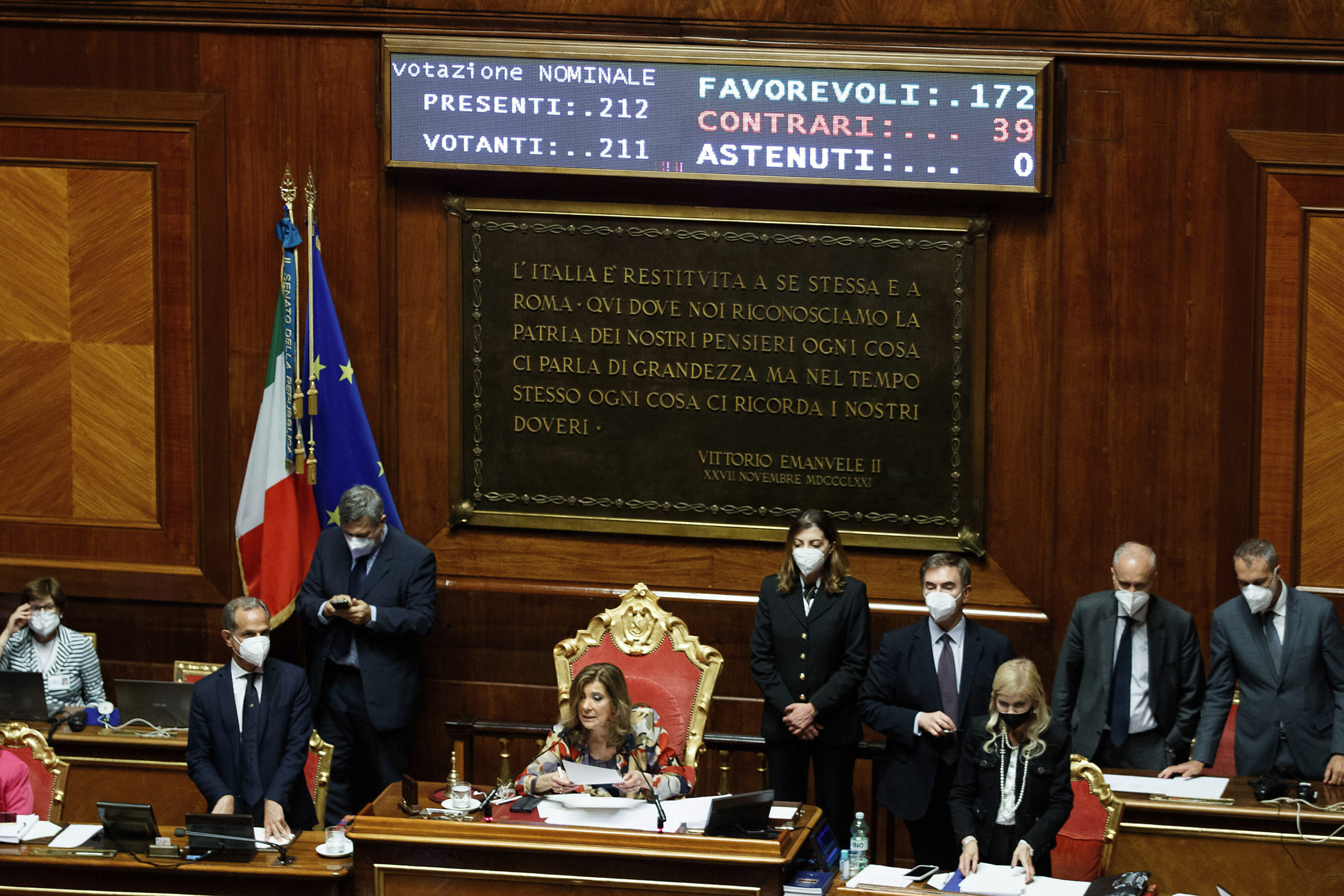 ROME (AP) — Italy entered into days of political and financial uncertainty Friday as Premier Mario Draghi weighed his options and political leaders considered theirs after coalition ally the 5-Star Movement sparked a crisis by withholding support on a government-sponsored bill.

On the immediate horizon are behind-the-scenes consultations through mid-week to see if Draghi still commands enough support to govern — which the Italian president and key parties clearly want — or preparations for snap elections as early as September.

Milan’s FTSE Mib was trading 1.08% higher Friday though the spread on Italian debt verses the benchmark German bund widened to 220 points, up 1.12% from Thursday’s close.

Draghi immediately offered to resign Thursday after 5-Star senators boycotted the vote, arguing that the conditions that created his government of national unity, which grouped parties on the right, left and the populist 5-Stars, no longer exist. But President Sergio Mattarella rejected his offer and told Draghi to go back to Parliament on Wednesday to see if he still had the support to govern.

The turmoil couldn’t have come at a worse time for the eurozone’s third-largest economy. Italy is facing soaring inflation and energy costs as a result of Russia’s war in Ukraine, a prolonged drought that is threatening crops in the country’s most productive regions and the ongoing implementation of its EU-financed program to recover economically from the coronavirus pandemic.

While Draghi might still have the numbers and the support of key allies to continue leading the government, some on the right are already gunning for an early election since they would stand to do well based on recent local election results and polls.

“With Draghi’s resignation, this legislature is over for the Brothers of Italy,” said Georgia Meloni, head of the right-wing party that is polling around 22%, nearly the same as the center-left Democratic Party. “We’ll fight until the Italian people are given back a right that citizens of every other democracy have: the freedom to choose their own representatives,” she said, with the hashtag #electionsnow.

Her frequent ally, former Premier Silvio Berlusconi’s Forza Italia, has urged Draghi to stay on, but has ruled out a newly composed coalition with the 5-Stars, blasting the party as a joke for having withheld support, in the end, over a new garbage incinerator for Rome.

“I have no words,” Forza Italia’s Antonio Tajani said Friday.

Friday thus opened days of back-room discussions among party leaders to decide what position to take on Wednesday, and if a new confidence vote is put before Parliament. Already, there were reports that the 5-Stars could vote in favor of a revamped Draghi program, but it’s not at all clear that other coalition parties would want them back in the fold.

Guido Cozzi, professor of macroeconmoics at the University of St. Gallen, said international markets are alarmed at the instability and that Mattarella did well to try to keep Draghi in place since he is widely seen as a “vital pillar in guaranteeing the stability of Italian public finances.”

“His coalition government was an unprecedented miracle in Italian political history,” Cozzi said in a statement. “However, Draghi lacks an independent political force behind him, and his government will always depend on antagonist party leaders.”

The 5-Star Movement, which was the biggest vote-getter in the 2018 national election, has seen its support tank in the ensuing years and would have everything to lose if Italy went to an early election.

Giuseppe Conte, the 5-Star leader, blamed others for forcing the Movement to boycott the confidence motion that was tied to some 26 billion euros in new financing to help Italians withstand soaring inflation and energy costs.

The tipping point, Conte said, was the inclusion in the bill giving Rome’s mayor extraordinary powers to manage the capital’s garbage crisis before the 2025 Jubilee — powers that Conte bitterly said had been denied the 5-Stars’ Virginia Raggi when she was mayor.

Ex-Premier Matteo Renzi, whose own power play made Conte’s government fall last year, blasted the 5-Stars’ “irresponsibility” this time around. He suggested the 5-Star play was essentially a gift to Russia, a reference to the 5-Star criticism of the government’s military support to Ukraine to help defend itself against Moscow’s war.

As if on cue, Dmitry Medvedev, the deputy head of Russia’s Security Council headed by President Vladimir Putin, posted the pictures of ousted British Prime Minister Boris Johnson and Draghi followed by a black box with a question mark, as if asking “who’s next?”

Medvedev’s post on his messaging app channel follows a stream of comments from other Russian officials who have attributed Johnson’s downfall to his focus on spearheading Western efforts to punish Russia for its invasion of Ukraine. The political crisis in Italy has drawn similar sarcastic comments in the Russian media and social networks.

Renzi alluded to the Russian sarcasm, telling Parliament that Draghi must continue on as premier because “if today there is a crisis, in other nondemocratic capitals, there will be someone who is celebrating tonight or tomorrow.”

“I’d like Italians to be celebrating, not others,” Renzi said.