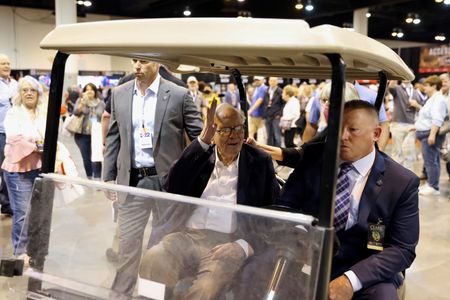 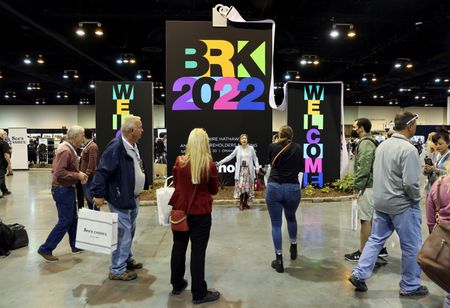 By Jonathan Stempel and Carolina Mandl

OMAHA, Neb. (Reuters) -Warren Buffett on Saturday took the stage at Berkshire Hathaway Inc’s first in-person annual shareholder meeting since 2019, where shareholders can quiz him on everything from corporate governance, potential new investments and his views on the economy.

Buffett talked about the virtues of holding substantial amounts of cash in his opening remarks.

Berkshire’s earnings earlier on Saturday showed its cash pile shrank more than $40 billion to about $106 billion.

Before doors opened at 7 a.m. CDT (1200 GMT), thousands of people massed outside the CHI Health Center arena in downtown Omaha, where they could talk with other Berkshire devotees.

“I bought a chair from Walmart so I could sit down,” said Tom Spain, founder of Henry Spain Investment Services in Market Harborough, England, who arrived at 3:15 a.m. CDT to attend his third meeting. “Everyone has been using it. Next year I might bring a massive container of coffee and give it out.”

Lauritz Fenselau, a 23-year-old owner of a software startup from Frankfurt, Germany, showed up at 4 a.m. CDT for his first meeting.

“Warren and Charlie are the priests. It’s like a pilgrimage,” he said. “I took three flights and 16 hours to get here, so I wanted to be here early.”

Andres Avila from Boston, a huge fan of Buffett, arrived in Omaha just five hours before getting in line at 4:45 a.m.

“I said: I’m already doing the trip for this. I just might as well get the best seat I can”, said Avila, carrying an umbrella to fend off the rain. “I have a bunch of my idols here.”

Berkshire also said operating profit was little changed in the first quarter, as many businesses were able to boost revenue despite supply chain disruptions caused by the Omicron variant of COVID-19 and Russia’s invasion of Ukraine.

Berkshire also said it spent more than $51 billion on stocks, including a much larger stake in Chevron Corp. It slowed repurchases of its own stock to $3.2 billion in the quarter, and bought back none in April.

The meeting may address issues such as recent investments, a still-swollen cash pile, share buybacks, rising inflation and supply chain disruptions, and even whether someone other than Buffett should chair the company.

Calpers, the largest U.S. public pension fund, and other investors are demanding that Berkshire replace Buffett with an independent chair, and disclose how its dozens of businesses promote diversity and address climate risks and mitigation. Buffett would remain chief executive officer.

The meeting is being broadcast online at cnbc.com https://www.cnbc.com/brklive22. Berkshire https://www.berkshirehathaway.com first webcast meetings in 2016.