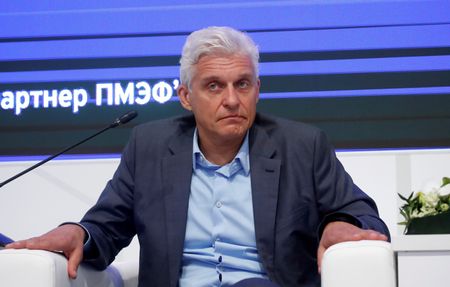 LONDON (Reuters) – Russian businessman Oleg Tinkov, who last week criticized Russia’s war in Ukraine, has sold his 35% stake in the company he founded to a firm controlled by Russian billionaire Vladimir Potanin, the companies said on Thursday.

The assets of Tinkov-founded TCS Group Holding include Russia’s second-biggest credit card issuer, Tinkoff Bank, which a few days after Tinkov’s anti-war statement said it had decided to rebrand and drop its founder’s name.

Potanin’s Interros Holding did not say how much it paid for the stake in TCS but the latter’s share price has plummeted since Russia invaded Ukraine in February, triggering sweeping Western sanctions on Russia.

It was the second deal this month in which Potanin has snapped up banking assets, having previously bought Rosbank from Societe Generale when the French lender exited the Russian market.

Cyprus-based TCS’ stable of companies under the Tinkoff brand span sectors from banking and insurance to mobile phones.

Potanin, 61, is the head of mining giant Norilsk Nickel (Nornickel), which has benefited from high metals prices in recent months. He is Russia’s second-richest man with a fortune of $17.3 billion, according to Forbes magazine.

Tinkov, 54, stepped down as chairman of Tinkoff Bank in 2020 after being diagnosed with acute leukaemia. In 2021 he ceded control of the TCS Group.

TCS quoted him as saying on Thursday that now was “the perfect time for me to retire and devote more of my time to looking after my health and my beloved family.”

Last week, he condemned what he called Moscow’s “crazy war” in Ukraine and said 90% of his countrymen did not support it.

In announcing its rebranding after Tinkov’s criticism of the Ukraine invasion, Tinkoff Bank said: “The company has long prepared for this. Recent events have made the decision more relevant.”

President Vladimir Putin calls Russian actions in Ukraine a “special military operation” to defend Russian-speaking inhabitants from persecution. Ukraine says it is fighting an imperial-style land grab and that Putin’s claims of persecution are nonsense.