How Bad Could the Correction Get?

Think you’ve avoided the hottest stocks in the market and will be able to sidestep most of the pain of the current correction?

Well, you may not.

Unless you’ve gone all in on cheap in your portfolio, things could get ugly.

It’s all explained in what I consider the most important chart in finance today.

The Most Important Chart in Finance Today

Those who bought the best-performing, expensive stocks are getting crushed as momentum plays, well, run out of momentum.

They’re like Wile E. Coyote running over the cliff.

All is fine until he looks down.

Well, the markets are looking down and there’s nothing there to support the sexiest, big growth story stocks that were the big winners over the past couple of years.

Take a look at this table from 361 Capital Markets’ weekly briefing to see what I mean.

It compares the returns of different market subsectors over the last month.

Profit Alert readers shouldn’t be too surprised where the leaders are: 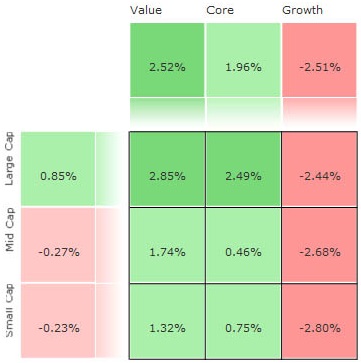 It’s clear the big winners have been value stocks. And the big drag has been growth stocks.

This trend should continue well into the future too because value stocks have lagged so far behind for so long:

As you can see, growth beat value in every subsector of the market over the past five years. And beat it big too.

We knew it would not last. On average, value outperforms growth every multi-year period you look at going all the way back the Great Depression.

Sure, there have been a couple of consecutive years where growth won. But it never lasted. Value always wins over time.

Now it’s set to win again. And since it has lost so much over the last few years, value will bounce back big now that it has the edge once again.

But here’s the thing. If you want to make money safely in the markets, you must buy value now.

How Low Can You Go?

When the high-flying names start to slide, it’s best to just get out of the way.

For most of them, they are just so far overvalued they could fall in half again and still be well above their fair value.

And given what we know about market history, they will likely undershoot their fair value before it’s all over.

Take a company like Splunk (SPLK) to see what I mean.

Splunk is the epitome a hot stock.

It has a great story as an upstart “Big Data” company. It helps companies manage the massive databases they have built about their customers and helps them manage and use it to improve their businesses.

It has a great list of customers too. International grocery chain Tesco uses Splunk. The FBI does. Hundreds of others do too.

This is all how Splunk has averaged growth of nearly 100% annual growth each year over the last few years.

It’s a great story. One of the best. And in a market that loved great stories, Splunk was a leader.

At its peak a few weeks ago Splunk shares had a Price-to-Sales ratio of about 40.

And, the ratio we’ve focused most on over the last few months, the Price-to-Book (P/B) ratio, was an astronomical 15+. Remember, we were advocating stocks with P/B ratios at or below one.

Anyway you look at it Splunk was exceptionally expensive.

When its uptrend broke, like Wile E. Coyote running over the cliff, there was nothing to hold it up.

That’s why Splunk’s decline has been inversely meteoric as its rise:

It’s the same story that happens with so many expensive stocks.

In the case of Splunk, nearly nine months worth of gains have been wiped away in as little as three weeks.

Splunk isn’t alone. All expensive stocks are getting crushed.

Meanwhile, there are a number of cheap stocks out there that are actually going up.

As you noticed in the first table above, there value side of the ledger is doing much better.

Last week we looked at one of the best values sectors in the markets.

It’s not sexy or exciting, but it is starting to get a lot of attention as it bucks the trend of the hottest stocks in the market. It was the utilities sector.

In the last month, utilities stocks are actually becoming the market leaders. Utility stocks actually made up three of top six performing stocks over the past month.

In the end, there could be a lot more pain ahead for previously hot stocks.

This year we started focusing on how value investing was going to make a big comeback.

That’s already started to happen. And given how long and deeply value stocks have lagged, they are the only place to make money safely in the markets today.

You only have to take part in the correction if you choose to. It’s a choice.